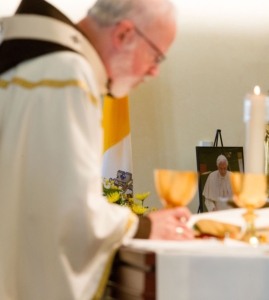 Cardinal Seán P. O'Malley celebrated Mass for the Feast of the Chair of St. Peter at the Pastoral Center Feb. 22 before heading to Rome for a conclave to choose the successor to Pope Benedict XVI. The feast commemorates Christ choosing Peter as his vicar for the Church. Photo photo/Gregory L. Tracy

BRAINTREE -- Cardinal Seán P. O'Malley celebrated his final Mass before heading to Rome for a conclave to choose the successor to Pope Benedict XVI at the Pastoral Center Feb. 22.

In his homily on the Feast of the Chair of St. Peter, Cardinal O'Malley spoke about the tradition set in place by St. Peter and followed by Pope Benedict XVI.

"More than a piece of furniture, today we celebrate the gift that Jesus gave to the Church in the ministry of Peter, the prince of the apostles, who was given the power of the keys and the command to confirm us in our faith."

He said St. Jerome, in his day, presented the Chair of Peter as the safe harbor of truth and peace, in a letter written to the pope.

"I follow no leader save Christ, so I enter into communion with your beatitude, that is, with the Chair of Peter. For this I know is the rock upon which Christ builds the Church," the cardinal said quoting St. Jerome.

"The man who is finishing his tenure in the ministry of Peter, Pope Benedict, has given us all an example of living a life of discipleship in faith, hope and love," he said.

The cardinal called for a blessing for Pope Benedict XVI, whose continued scholarship and prayer Cardinal O'Malley anticipates as a future blessing for the Church.

"When the conclave has done its work, and a new successor of Peter is named, let us all rally around him joyfully and enthusiastically, so that together we can accomplish the mission that the Lord has entrusted to us," he said.

"For us, it must not matter where the pope comes from, what color he is, how tall or how short, what language he speaks or doesn't speak. What is important is that he becomes the successor of Peter, the pope of Rome, and of the world, the one destined to walk in the shoes of the fisherman, and to confirm us in our faith," Cardinal O'Malley said.

Afterward some of those who attended the Mass shared their thoughts with the gathered media and The Pilot.

Danny Baker, 36, a Knight of Columbus who attended the Mass said he felt that the "...Church is moving forward.... I feel the Church is continuously growing in love and peace."

He said he felt a sense of sadness at Pope Benedict XVI retiring, and said he would miss Cardinal O'Malley if he were elected pope.

Ellen Mallett, 55, a parishioner at St. Francis of Assisi in Braintree, said she believed Pope Benedict XVI's assertion that the burden of the office weighs heavily as he ages.