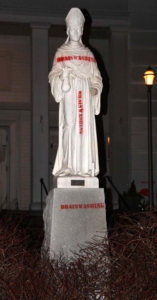 WILMINGTON (AP) -- Wilmington police are investigating after three churches in town were vandalized in the early morning hours of Saturday, Feb. 2.

St. Thomas of Villanova and St. Dorothy's Catholic churches as well as the Congregational Church were hit.

The vandalism at all three appears to be the work of the same person or people, given its similarity.

St. Thomas suffered the most damage, with the word "brainwashing" stenciled on the doors and statues, and a picture of a TV with a brain inside painted on another door.

At the Congregational Church, the same word was painted on a door.

The Sun of Lowell reports that the vandalism had been largely painted over or covered up by Sunday, Feb. 3 but left clergy baffled.

At St. Thomas, Father Phillip Earley asked parishioners to pray for the vandals.