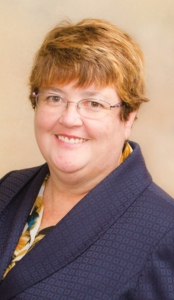 Vivian Soper has been appointed Director of the Office of Pastoral Support and Child Protection. Pilot photo/Gregory L. Tracy

BRAINTREE -- The Archdiocese of Boston announced Jan. 28 that Vivian Soper has been appointed Director of the Office of Pastoral Support and Child Protection. She succeeds Barbara Thorp, the long-time director of the office, who stepped down last September. Soper will begin her new role in mid-February.

A resident of Weymouth, Soper has served as Regional Director for Catholic Charities of Boston since 2003. Her new office is dedicated to providing pastoral and outreach services to survivors of clergy sexual abuse and their families as well as parishes and all those impacted.

Bishop Robert P. Deeley, Vicar General and Moderator of the Curia said, "This important work of helping survivors heal is a commitment of the Church and we are fortunate that we are able to have someone of Vivian's substantial gifts and background available to oversee this ministry.''

"I also want to express my appreciation to Rev. J. Bryan Hehir, Secretary for Health and Social Services, for conducting a careful search process and for the members of the search committee who treated this responsibility with sincerity and great care for all impacted by sexual abuse," he said.

In a statement, Soper said the healing of survivors and their families is "a cause near to my heart."

"Over the years Cardinal Seán has never wavered in expressing his care and concern for all those impacted by clergy sexual abuse. I am honored to be able to join the dedicated staff at the office of Pastoral Support and Child Protection and be part of fulfilling our ongoing commitment to survivors and their families, both now and into the future," she said.

Soper will work with Father J. Bryan Hehir, Secretary for Health and Social Services. Father Hehir said, ''We are pleased to welcome Vivian to this important ministry of the Church. She has earned the trust of many with her exceptional work with Catholic Charities of Boston. We also want to thank Catholic Charities President Debbie Rambo for allowing us to seek the leadership talents of Vivian in her new role. The Church is committed to the protection of children and the pastoral care of those impacted by the tragedy of clergy sexual abuse.''