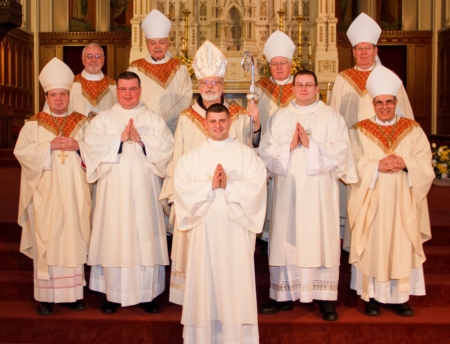 SOUTH END -- Cardinal Seán P. O'Malley ordained three transitional deacons on Jan. 19 at the Cathedral of the Holy Cross in the presence of family, friends, seminarians, clergy and religious.

"As deacons and future priests Christ is calling you to be his shepherds," Cardinal O'Malley said in his homily.

Deacons John A. Cassani, Gerald A. Souza and Christopher W. Wallace received ordination as the last major step toward ordination to the priesthood.

"We all look forward to their priestly ordination during this Year of Faith," the cardinal said.

The three new deacons, along with their classmates Deacon Jacques A. McGuffie and Deacon Thomas K. Macdonald, are scheduled to be ordained to the priesthood in June.

The deacon, from the Greek "diakonos" meaning servant or minister, is the first of three ranks of ordained ministry in the Church. Among the many functions they perform in parishes, deacons may preside at baptisms, weddings and rites of Christian burial, assist the priest at Mass, proclaim the Gospel and deliver homilies.

"The first seven deacons were chosen so that the apostles would have some help, and therefore have more time for prayer and to preach. The deacon also needs to have time for prayer and for teaching the faith. Your ministry -- a ministry of charity and service to the poor, the widowed, and the orphans -- your call to be bridge builders between various ethnicities, to be builders of unity all requires a deep prayer life and involvement with the word of God," the cardinal said.

In his homily, the cardinal called each of the men to a life of service to the Church, to counteract a "spiritual Alzheimer's" he said causes people to forget God and a "spiritual anorexia" that starves the Church.

"You men are being ordained to be an antidote and a cure for these modern maladies, for you are called to feed God's people with the word of God and the bread of life, reminding them how much he really loves them," he said.

Cardinal O'Malley noted the presence of Boston seminarians in support of the men to be ordained.

"It is great to see all of the seminarians here. If we have great seminaries in part, in great part, it is due to the fact that we have such wonderful students at St. John's, at Blessed John and the Redemptoris Mater Seminary here in the archdiocese," he said.

The rite of ordination to the order of deacon began during the Liturgy of the Word. After the Gospel acclamation, Msgr. James P. Moroney, the rector of St. John's Seminary, called the men forward and the cardinal elected them for holy orders.

Cardinal O'Malley asked each man a series of questions. Each promised respect and obedience to the cardinal and his successors and then lay prostrate in the sanctuary while the congregation prayed the litany of saints.

The cardinal then imposed his hands on each man and silently prayed the prayer of consecration, which completed their ordination to the transitional diaconate.

Cardinal O'Malley then presented the deacons with the Book of the Gospels and instructed them to believe, teach and practice the Good News of Jesus Christ.

The rite of ordination concluded with the kiss of peace given by Cardinal O'Malley, followed by the bishops, priests and deacons present for the ordination.

After the investiture, where each man received the stole and dalmatic of their office, the newly ordained joined in the continued Mass ministering the Eucharist as deacons for the first time.

After the Mass, Deacon Christopher Wallace said he felt a special honor at being ordained a deacon, and in June to be ordained a priest, during the Year of Faith. He also turned 30 on the day of his ordination as a deacon.

"I hope my public witness of saying yes to our holy Catholic faith will inspire others to deepen their commitment to the Church and the Lord," Deacon Wallace said.

"The Lord is very consistent. The more you say yes to him, the more he amazes you with his grace and blessings," he said.

Kathy Moran-Wallace said she felt very proud of her son on the day of his ordination, and had confidence in his abilities to serve the Church.

"I am sure he is going to preach the word of God and the joy of God very well, to everyone," she said.

Christopher Casani, the brother of Deacon John Cassani, said his brother's calling to the priesthood became clear when he was in college.

"I remember John talking about going to the Tridentine Mass when he was in college and being very enamoured with it. I think seeing that Mass kind of prompted him to take his faith more seriously. I think the proof is in the pudding. Here we are today. He is ordained a deacon," he said.

Paul Souza said he felt a sense of excitement for his son, Gerald Souza, even in the process leading up to ordination.

"The opportunities that the Church has offered for him, and the leadership, and the training, and the learning, it is just overwhelming all that he has been able to do, and fantastic," he said.

"These three men being ordained today is a sign of great hope for the Church and it is also a sign of the reality that vocations come from healthy and strong, holy families and communities," Father Daniel Hennessey, vocation director for the Archdiocese of Boston, said.