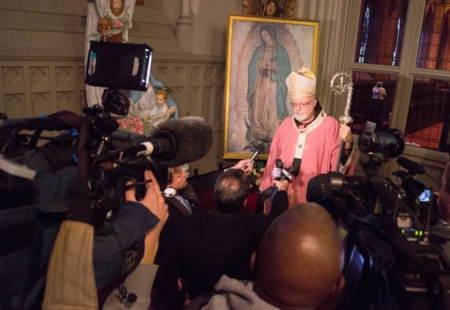 Cardinal O'Malley speaks to the media following a Dec. 16 Mass at the Cathedral of the Holy Cross. Pilot photo/Christopher S. Pineo

The cardinal made his remarks at a previously scheduled Mass at the Cathedral of the Holy Cross to celebrate the "Rite for the Blessing of a Child in the Womb" Dec. 16.

"Assault weapons only kill people. Why is that allowed? It is just absurd. Hopefully this will galvanize the country to do something to stop it," he told the media after the Mass.

He said the Church should "try to encourage the whole community to respond to this."

In his comments, he echoed a call he made during his homily at the Advent Mass.

"As the whole country reflects on these tragic events we must recognize our society's inability to deal with mental illness in a more effective way. It is also a clarion call to initiate effective legislation to keep automatic weapons out of the hands of private citizens," he said in his homily.

He said the public availability of such dangerous firearms has no place in American society.

"There can be no rational justification for allowing people to have personal arsenals of assault weapons. How many innocent people will have to be slaughtered before the country is prepared to stop this madness?" he asked.

In his homily he also spoke about the impact of the tragedy on the minds of survivors, about the significance of community after the tragedy, and about the role of faith during a Christmas season marred by violence.

"What has happened in these days in Newtown, Connecticut is a tragedy of almost biblical proportions. It has caused the whole country to stop and to take notice," he said

"The children and the teachers who survived the attack will long suffer the trauma of being exposed to such senseless violence," he said.

The cardinal said it was painful "to see the police leading children out of the school, telling them to close their eyes, so the image of the slain children would not be burned indelibly into their memories."

He spoke of the sense of solidarity and support for the community that has come in the wake of the shootings.

"The news reports have spoken about how the community has come together to pray and to find strength in mutual support," he said.

"It is comforting to see how a national tragedy such as this one brings people together, and they suddenly manifest their concern for each other and their desire to be present to those families who are suffering with such a painful loss," he said.

For the faithful, he drew attention to the promise of eternal life.

"For those of us who are believers, prayer and the firm faith in eternal life are our consolation. These innocent children had a very short sojourn in this world, but our faith assures us that God made them to be happy with Him forever in Heaven," the cardinal said.

He noted that while the Holy Family celebrated the birth of Christ in the manger, the surrounding land mourned over the death of innocent children.

"Each year during the Christmas season we have a feast, the Feast of the Holy Innocents, to commemorate the slaughter of those children as described in the Gospel of St. Matthew, where Matthew recounts how King Herod ordered that the children of Bethlehem be slain in order to eliminate any future rival to his throne. The story hearkened back to a similar event in the Old Testament, where the pharaoh had ordered the execution of all the male Hebrew children," he said.

He also pointed to the message of John the Baptist as he prepared the way for the coming of the Jesus by announcing the news in the desert.

"In the Scriptures, the desert is a place of testing, a place of encountering God, but the reports about the massacre in Newtown test all of us. In these days before Christmas we must take time and space for God, to discover God's presence among us even in the darkness, to discover our reason for existence," the cardinal said.

The cardinal said that, in the days following the shooting, he read the obituary of Mary Ann Fischer. Fischer drew national attention and celebration when she gave birth to the first set of surviving quintuplets in U.S. history almost 50 years ago.

He tied that celebration and the mourning over those lost in Newtown to the blessing given to unborn children at the Mass.

"The joy and enthusiasm of our country in 1963 over the birth of five tiny babies and the country's pain and frustration over the loss of 20 innocent first-graders are both a testimony that every child is precious. Our prayer for these yet to be born is that they will live in a world that will be safer for children, a world where children will be nurtured, protected and loved," he said.

"As a priest you accompany the people, you try to announce the Gospel, and help people to find meaning and strength in their faith in the midst of suffering, call them to hope -- which is the message of Christmas -- and not to be overcome by darkness and despair," the cardinal told The Pilot after the Mass.

The tragic events in Newtown were especially poignant for the expectant mothers who were at the Mass to receive a blessing for their unborn children.

"It is just a time to really reflect and just think about the precious gift that life is at every stage, to never take it for granted, and the importance in remembering to ask Blessed Mother and Jesus to always be with us, our families, for their protection, and just to pray for those souls," Corinna Tavano, 42, a parishioner at St. Maria Goretti's in Lynnfield, said.

Zina Gomez-Liss, 38, a parishioner at St. Peter's in Cambridge, gave her perspective on receiving the blessing offered at the Mass after the tragedy.

"To be able to do this at this time, in a way it is sad, but you feel like it makes you appreciate who you have and why to spend so much time with them, because everything can change so quickly," the mother of three children under age 10 said.

She said people asked her about her feelings in relation to the tragedy, before speaking with The Pilot.

"I think there has been so much anger, that I felt like the only way to respond to this is with a lot of hope," she said, as she expects her fourth child.