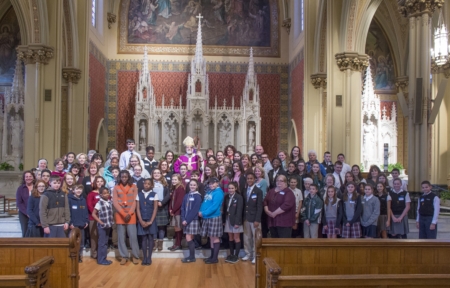 'On Wednesday (12/5), I attended the Missionary Childhood Association's first annual Mission Education Day at Our Lady Help of Christians in Newton.' Pilot photo/CardinalSeansBlog.org

Thursday (11/29), I attended a gathering to remember the life of Dr. John Silber. Dr. Silber was an extraordinary man who was president, and later chancellor, of Boston University, which is one of the very large universities in Boston. Dr. Silber was a native of San Antonio, Texas. He was a profoundly religious man and was a good friend of Cardinal Medeiros from the days when Cardinal Medeiros was the Bishop of Brownsville.

... He was also a very pro-life individual. I had him address the Catholic lawyers at the Red Mass a few years ago and he did an outstanding job. He was a man who had a beautiful family. Everything he did he did well. I considered him a friend, and pray for him and his family.

Sunday (12/2), we welcomed the Vienna Boys Choir to the Cathedral for a very beautiful concert. During the first part of the program they sang a lot of Baroque music as well as some modern music. Then, the second half of the program featured Christmas carols. We were very surprised and pleased by the turnout for the concert. We were only expecting about 800 or 900 people, but we estimate there were about 1,500 or more. Many people brought their children, which I think is wonderful. I suspect children do not often have a chance to hear this kind of music, but the fact that the choir itself was made up of children was a draw.

Visit to the women's correctional institution in Framingham

On Tuesday (12/4) I went to the women's correctional institution in Framingham. We had lunch there at the restaurant that they have set up to train women for careers in food service. They also train women for careers in cosmetology and hairdressing. After lunch, I had Mass for the women and then I visited those in the infirmary and isolation. Then, I had another meeting with women who are in the prerelease program. Of course, at this time of the year it is difficult for women who are in prison, as many of them are mothers unable to be with their children. During the visit I met a man, who I presume was a grandfather, carrying a little child. The little girl said, "I come every Tuesday to see my mommy." She was only two years old. He said he takes her to Mass every Sunday. It was very nice because it was obvious that he was trying to teach her about God. Sister Maureen Clark has been the chaplain there for over 20 years. (I told her, "That's a long sentence!") But she has done just an extraordinary job and has implemented many innovative programs for the women. One of them is to have them read stories that are recorded and played for the children. In that way, they can read to their children, even though they cannot be with them.

On Wednesday (12/5), I attended the Missionary Childhood Association's first annual Mission Education Day at Our Lady Help of Christians in Newton. The day was originally scheduled at the cathedral in October, which is Mission Month, but was postponed due to Hurricane Sandy. The Missionary Childhood Association is one of the four Pontifical Mission Societies in our Church. It is geared toward children. We invited all the elementary schools and parish religious education programs in the archdiocese to send student representatives, and an adult moderator or two, to be commissioned as the official Mission Representatives for their schools or parishes.

At the Mass, I blessed mission crosses that the children will wear at their school or parish as a sign of their new responsibility. Each group also made a craft based on the World Mission Rosary to take back to their school or church to hang as a mission centerpiece. In my remarks, I urged the students to become more deeply involved with the missionary work of the Church and that this was going to be just the first of many great days like this of students coming together to learn more about their missionary vocation.