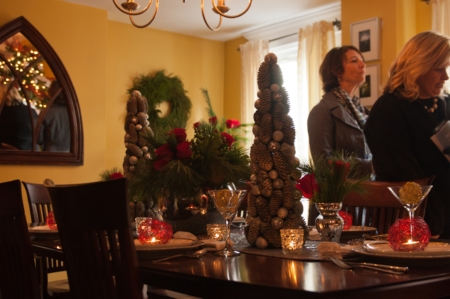 SOUTH BOSTON -- With decorative themes ranging in inspiration from Dr. Seuss to Charles Dickens each of the six houses opened for an annual South Boston Christmas tour told visitors a story.

"The Christmas House Tour at Laboure has a long tradition of supporting the programs of Laboure Center in South Boston. It is a great way for the community to come together to recognize the strengths in the community and just come together to support the work that we do from early child care, to elder services, to everything in between supporting children and families in South Boston. It's a great, great tradition," said Catholic Charities' president Deborah Kincade Rambo.

This year all the homes were within walking distance to one another, with refreshments available at South Boston High School.

Owners who volunteered their homes for tours decorated their property with a Christmas-related theme.

One resident themed the decor "A Seussical Christmas," and another chose "God Bless Us, Every One."

"It's been a wonderful experience for me because I have met so many wonderful people in the process, the people that have helped put this program together and my neighbors," Rocco said.

She said she enjoyed supporting the work of Catholic Charities through the Laboure Center by volunteering her home, and plans to do so again in the future.

"I feel like I have a whole new huge group of friends in the community," she said.

Organizers provided guests of the tour with a booklet outlining the historical significance and explaining the architecture of each of the homes on the tour.

Through the description of Rocco's house, guests learned that while the three condominiums in the house have modern conveniences including built-in iPod docks, bathrooms with heated floors, and a kitchen furnished with stainless steel appliances, the building's construction also reveals a late 19th century pedigree.

Built in 1875 the house displays Second Empire or Mansard style architecture -- the style, popular between 1865 and 1880, takes its name from the Second French Empire of Napoleon III -- with the Mansard roof named for 17th century designs of French architect Francois Mansart, which became popular in the United States at the time.

Actors portraying figures of the time also added to the experience on the Sunday tour.

In front of one house, an actor portraying Henry Knox -- for whom the famous fort is named -- explained his historical connection to South Boston.

Before Knox's promotion to general and later service as the first United States secretary of war, Knox facilitated a critical defeat of the British at Dorchester Heights, commemorated in Suffolk County as Evacuation Day.

J. Archer O'Reilly III, speaking in-character as Knox, attributed his 262 years of longevity to the events of that March 17 in 1776.

Using cannon famously transported from New York's forts Ticonderoga and Crown Point, Knox fortified the heights with cannon, emplacements and trenches. The maneuver contributed to break the Siege of Boston when the British fled 13 days afterward.

"I had an ulterior motive. When they left they took every single one of my in-laws with them," he told a crowd of guests waiting in line at a home decorated to the theme "Joy to the World."

Nancy Lee of St. Mary's of the Sacred Heart parish in Hanover said she and a group of friends come each year to enjoy the tours and connect with one another.

"It starts off our Christmas season," she said.

"I am originally from Dorchester and I have a lot of friends from South Boston, so it is good to see the old neighborhoods," she said.

In this, its 105th year, the Laboure Center, a community service center of Catholic Charities, Archdiocese of Boston, hosted guests of the tour for refreshments and a Christmas sale.

On the ride to the center, an event organizer asked how guests enjoyed walking between the homes in one area, rather than taking a trolley ride between homes as in years past.

One friend of Lee said she sometimes saw more homes in years past, but preferred the change this year.

"I enjoyed this year's better because they were clustered together, and you weren't on and off the trolley and waiting for the trolley," Jane McNulty of St. Agatha's Parish in Milton told The Pilot.

She said she enjoyed having everyone in the same area as guests strolled through the streets to reach each of the houses.

"Sometimes you see different people that you know," she said.

The Saturday tour began at the Iron Workers Local No.7 Union Hall in South Boston. Following Saturday's tour, guests visited one of seven local restaurants in South Boston for a complementary glass of wine and cup of chowder.

The $90,000 raised through the event will help Catholic Charities continue its mission of "building a just and compassionate society rooted in the dignity of all people" at the Laboure Center.

"The funds go directly to Laboure and the programs here in South Boston," Rambo said.