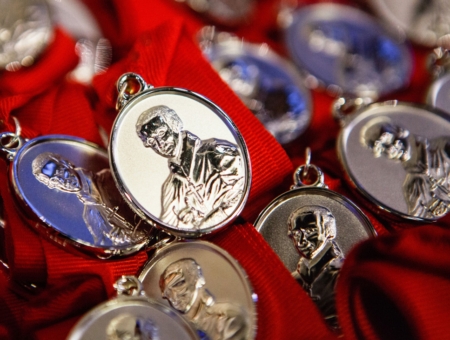 The Cheverus Award Medal is made of sterling silver and bears a likeness of Bishop Cheverus based on the Gilbert Stuart portrait. On the reverse side is Bishop Cheverus' coat of arms. Pilot file photo/Gregory L. Tracy

BRAINTREE -- Cardinal Seán P. O'Malley will present 121 Cheverus Award Medals to laypersons, deacons and religious during a 3 p.m. service on Nov. 18 at the Cathedral of the Holy Cross.

First presented in 2008 at the conclusion of the archdiocese's bicentennial, the annual award recognizes Catholics for their dedicated service to the Church. The medal is named for the city's first bishop, Jean-Louis Anne Magdelaine Lefebvre de Cheverus, who led the diocese from 1808 until his return to France in 1824. Bishop Cheverus died in 1836 as the Archbishop of Bordeaux.

The oval-shaped medal is made of sterling silver and bears a likeness of Bishop Cheverus based on the Gilbert Stuart portrait. On the reverse side is Bishop Cheverus' coat of arms.

Each year, one third of the parishes of the archdiocese are asked to nominate a parishioner, therefore most parishes will have one honoree every three years. The criteria given to pastors is that the nominee should be a lay person who has served the parish well over an extended period of time and has done so in a quiet, unassuming and, perhaps, unrecognized fashion.

The Regional Bishops each year are asked to nominate from their respective regions a religious and a deacon of similar qualifications to be honored with the Cheverus medal. The Central Ministries of the archdiocese also make nominations from among religious, deacons and lay persons who serve on archdiocesan committees or lead important ministries.

Including this year's group of 121 recipients, there are 517 individuals and couples that have been named Cheverus medalists. There were 68 awardees in 2008, 133 in 2009, 98 in 2010 and 97 in 2011. The medals are typically presented on the Feast of Christ the King, which ends the Church's liturgical year. Because Pope Benedict has called a consistory in Rome this year on that date, Cardinal O'Malley is presenting the awards a week earlier.

There is no limit to the number of family members and friends who can join the honoree at the cathedral. The presence of the pastor and a delegation of parishioners is encouraged to help underline the appreciation and gratitude of the parish towards the honoree.

For more information on the award and for a list of previous award recipients is available at www.BostonCatholic.org/cheverusawards.aspx.

Following are the 2012 Cheverus Award recipients: