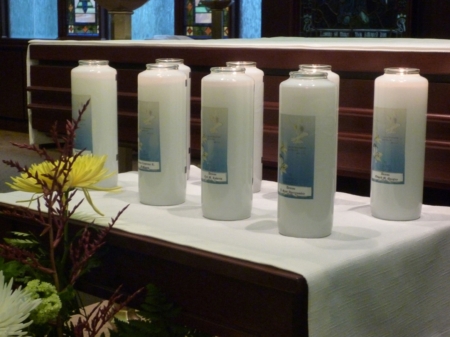 Candles burn in memory of seven members of the permanent diaconate who passed away in 2012, with an eighth burning in memory of Father Richard J. Butler, director of the Permanent Diaconate from 1994-1996. Pilot photo/Deacon Lou Piazza

BRAINTREE -- At the Annual Diaconate Community Memorial Mass deceased deacons who served the Archdiocese of Boston were commemorated, as family members lit candles in Bethany Chapel.

Cardinal Seán P. O'Malley celebrated the Oct. 28 Mass, where they lit seven candles for deacons, and an eighth for a fondly remembered leader of the diaconate.

Father Richard J. Butler served as director of the Permanent Diaconate from 1994 until 1996, and passed to the Lord on Sept. 30 of this year.

"He was a good man, a great man, and an easy man to work with," Deacon John Mannion, 85, said, recalling the support given by the director for Mannion's work in prison ministry.

Mannion, of Galway, Ireland, was the first Irish-born deacon in Boston and served until age 80, five years longer than usually required.

"I think it is very important to remember all the men we have worked with, all the deacons, and their wives. I have been privileged to know most of the men who were remembered in the Mass Sunday," said Mannion, who received ordination in 1986.

The Mass also celebrated the lives and work of the seven deacons who died over the past year.

"These men were a real part of my life," Mannion said.

"It is a tight-knit community and we share our goings on, as I say, in the different ministries we have," he said.

The Diaconate Festival Choir led by Deacon Joseph MacDonald, director of music at Saint Francis of Assisi Church in Braintree, provided music for the liturgy. Deacons and wives of deacons in the choir provide liturgical music for several events during the year. The music program featured a presentation of "Pie Jesu," by Gabrielle Faure, and an original composition, "Now O Lord," written by Deacon MacDonald.

The Mass also commemorated the 88 deacons and 42 wives of deacons who died over the years since the first class received ordination in 1976.

Mannion said a poem read at the Mass reminded him that the men and women remembered live on in the memory of their peers as the ministry of the diaconate continues.

"That's the essence of the diaconate to me. It's a community, a close-knit community without being a clique, who serve God through serving his people," he said.