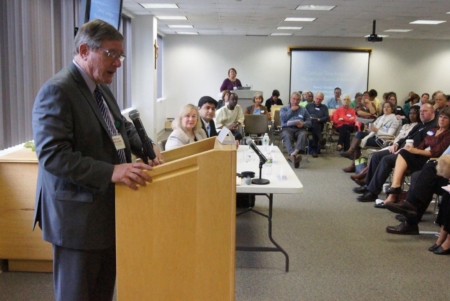 The promotion of advocacy, engagement in the fight to defend human life from physician assisted suicide and the growth of networking as a way to forward social justice work in the archdiocese were the three objectives the convocation intended to encourage, she said.

"Look around you. Get to know your neighbors. Encourage one another. There are so many people in this room, and beyond, who are doing good works," Dinneen said.

Father Hehir acknowledged the work of the laity in the Church's social justice efforts with a quip as he opened the convocation with his keynote address "Citizenship and Discipleship."

"This has usually been the division of labor in the Holy Roman Church; the priest is the inspiration and the people are the perspiration. Get it done. Lay hands on life," he said.

Father Hehir expounded on the internal relationship between discipleship of Christ and citizenship in society in the life of a Catholic.

"Citizenship is a category as ancient as discipleship. The discussion of Christians and their role in the world appears right in the New Testament. It is manifested in the Acts of the Apostles. Think of the different ways in which our discipleship is joined to citizenship," he said.

He tied the themes of the New Evangelization, the Year of Faith, and the 50th anniversary of Vatican II to a call for Catholics to work toward the common good on earth.

"That is the framework that Vatican II gives us. As disciples and citizens we are the artisans of the Kingdom. We do the work of the Kingdom," he said.

The panel took up the Catholic perspective on why Massachusetts residents should vote "no" on Question 2, which would legalize assisted suicide in the state if passed on Nov. 6, as well as discussing the inherent weakness of proposing the law through a ballot question during an election year.

"To blindside our voting public when they walk into the voting booth on Nov. 6 with a referendum question of this magnitude, of this gravity, suggests to me that we are going to come away with an uninformed decision," Sullivan said.

Sullivan said one of the reasons citizens in Massachusetts should not vote for the ballot is because of flaws in the structure of enforcement and accountability laid out in the proposal, and the potential harm to individuals struggling with their mental states as they reach the end of life.

She also said measures taken to help patients end their own lives will set back years of work in the medical field directed at changing attitudes and perceptions toward patients.

"What this is doing is undermining decades of work, I have been a nurse for decades, where we try to see the patient holistically, as set into some kind of network, whether it is family in the biological sense or family in the social sense. This bill, the way it is written, turns death into a possibly incredibly isolated event," she said.

Dr. Merchant stressed the need to provide adequate relief of pain and treatment of symptoms through palliative care at the end of life rather than helping patients end their lives using doctor prescribed medications.

"There have been many studies in many of the medical field review journals which show that palliative care programs consistently improve physical symptoms, they improve psychological management, they improve care-giver wellbeing, and family satisfaction," he said.

Cardinal O'Malley encouraged participants to continue the fight in the homily of the closing Mass, fortifying them by focusing on Jesus who is as attentive and patient as a gardener tending to his plants.

"Jesus is that gardener who has such great patience with us and is always saying, 'One more year I am going to try.' And with his help we are going to produce the fruits of justice and peace that he expects of us, his disciples," the cardinal said.

The cardinal made no effort to skirt life issues in his homily, giving a robust address of Catholic social teaching.

"Suicide is a physical and a moral danger," he said. "The Gospel of Life is the centerpiece of the Church's social teaching."

Convocation participants said the day presented an opportunity to learn more while joining together to advance social justice causes on a parish level.

"It looks different for every single person here, but we are all dedicated to spreading Christ's word and what that looks like in our world," Jen Suehs-Vassel, 30, a pastoral associate at Our Lady Help of Christians in Newton, said.