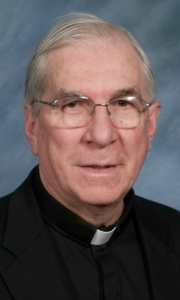 Father David A. Doucet, pastor of St. Isidore Parish in Stow died Oct. 12 in Malden. He was 70 years old.

Born in Boston on June 6, 1942 and raised in Brighton, he was one of three children of Armand and Dorothy (Campbell) Doucet. He studied for the priesthood at St. John's Seminary and was ordained at the Cathedral of the Holy Cross on May 21, 1969 by Cardinal Richard Cushing.

Father Doucet's more than four decades of ministry is characterized by long periods of service at only four parishes in the archdiocese.

His first assignment following ordination was as assistant pastor at St. Thecla Parish in Pembroke, where he served for almost seven years.

On Jan. 8, 1976 he was named associate pastor St. Bridget Church, Abington and remained there for over 10 years.

Father Doucet is also remembered for his service as chaplain of the fire departments of Somerville and Stow.

Interment was at Evergreen Cemetery in Brighton.

Father Doucet is survived by his niece, Kimberly Goodman of Malden, and his nephews, Daniel Doucet and Kenneth Doucet, both of Arizona.