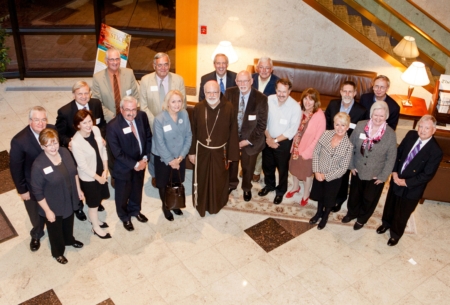 BRAINTREE -- Cardinal Seán P. O'Malley and organizers of the 2012 Catholic Appeal brought volunteers, staff, priests, religious and bishops to the Pastoral Center on Oct. 11 for a Mass and reception to officially thank the group for their work, on behalf of the archdiocese.

"We have achieved so much through the support of our 50 different ministries such as the 7,000 adults who are participating in 'Why Catholic?' the adult faith formation program, 124,000 children and young adults learning their Catholic faith in the religious education programs throughout the parishes, leading thousands of college students on their faith journey through campus ministry in 21 secular colleges," the cardinal said, at the reception.

"These are just some of the examples of the wonderful works that are being supported by the appeal. Thank you for your dedication," the cardinal said.

The cardinal thanked the priests, religious, bishops, parish coordinators and all the staff gathered to celebrate the appeal at the pastoral center. The cardinal said the appeal raised $11.4 million of the $14 million goal as of that evening.

Also speaking at the reception following the Mass, appeal committee member John Riley thanked those who worked at the parish level coordinating efforts for the appeal.

"I want to thank all of you who are our lay appeal coordinators because I know that this is something that you do out of your love for the Church, and love for your parish," he said.

Riley said this put the appeal 80 percent to the goal, above the amount raised by the same time last year.

"It is a commitment that you all make and we really appreciate the work that you do," he said.

Mike Griffin of Sacred Heart Parish in Roslindale, described his work as the appeal coordinator in his parish for The Pilot. He said that as coordinator he organized events, made sure sound systems worked in the church, coordinated messages such as the recorded homily from the cardinal in March, introduced speakers in support of the appeal, and coordinated with the staff at the archdiocese.

Though Griffin appreciated the thanks of the organizers, he said he also wanted to return the message of thanks to the archdiocesan staff, who helped organize collaboration between appeal coordinators, parishes and the archdiocese.

He said he observed a level of coordination and organization in the appeal effort that impressed him, in light of his prior experience working as a project manager with IBM before he retired in 2003.

"I'll tell you this was a good project. I had never seen a better project. It was just well defined. Our goal was set. There was support when I needed it. It was very well managed and very well documented and that kind of thing. I appreciate those people very much because they made my job very, very easy," he said.