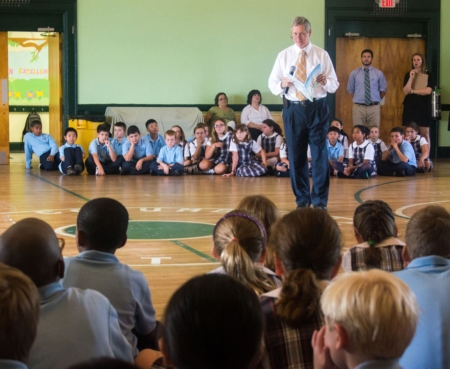 William Gartside, Head of School at St. Columbkille Partnership School in Brighton, reads to students from "Have You Filled a Bucket Today: A Guide to Daily Happiness for Kids" on the first day of school, Sept. 5. Pilot photo/Christopher S. Pineo

BRIGHTON -- With the end of the long Labor Day weekend signaling the conclusion of summer vacation, students at Catholic schools throughout the archdiocese headed back to class this week.

"When you're a principal particularly, you are in a school building during the summer and there are no kids there. It's not really a school over the summer. It's a building over the summer. When you can see the kids coming in after vacation and 99 percent of them beaming ear-to-ear with smiles, they are excited and they are exuberant, it just uplifts you," said William Gartside said, Head of School at St. Columbkille Partnership School in Brighton.

Like many Catholic schools in the archdiocese, St. Columbkille's has been preparing throughout the summer to enhance the learning environment.

Gartside greeted students on the first day of school on September 5 by reminding them of the importance of treating one another with respect as part of the tradition of Catholic schools.

First Gartside read a book called "Have You Filled a Bucket Today: A Guide to Daily Happiness for Kids." The story presented the idea of "filling someone's bucket" as an analogy for treating others with kindness.

Making his rounds to different classrooms afterward Gartside found one particular classroom ready to take up the calling to treat others with kindness daily. The students and teachers had posted on the bulletin board in their classroom colorful letters arranged to read "Have you filled a bucket today?"

The teacher explained that her class had agreed to do acts of kindness for one another each day, and represent those acts on paper buckets pinned under the question.

Gartside also said the potential to teach the students the values of the school, and Catholic education, grew this year through the expansion of the technologies available to students at St. Columbkille.

"We have upgraded our technology so that we can increase the learning or teach kids how to be 21st century learners in a lot easier way," he said.

Katie Corkum, the director of instructional technology, said the addition this year of such technology as iPads for each student, a teacher-monitored social media platform, and cloud computing will help prepare students for the future as well.

"I think we are really giving kids the basis to move on to high school and be familiar with those concepts in terms of social media, in terms of writing essays online, and collaborating with one another for group projects," Corkum said.

She also said the interactions encouraged in a controlled social media environment can help students beyond the classroom setting as they learn about acceptable behavior in social media interactions.

Gartside said even as the new technology goes into place the school remains committed to education by reinforcing the basics through new programs at the school as well.

"If you are not a good writer, technology alone does not help you. So, you want the kids to have that base core of reading, writing and arithmetic," he said.

Gartside added that for all the new initiatives and new ideas, one commitment at the school remains the undisputed focus -- the commitment to share long-established values with students in the tradition of Catholic education.

"As a principal it's not just to be excited that kids are coming back, it's to be in a school that has strong values and that we know everyone is pulling together to put those values in a real technology-rich environment. I love to come to work every day, and on the first day of school it is in a special way," he said.