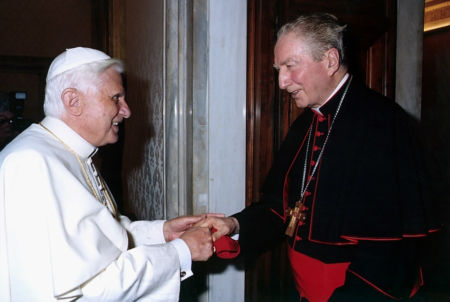 Pope Benedict XVI greets Italian Cardinal Carlo Maria Martini during a private meeting at the Vatican in this May 27, 2005, file photo. Cardinal Martini, a renowned biblical scholar and former archbishop of Milan, died Aug. 31 after a long battle with Parkinson's disease. He was 85. (CNS photo/L'Osservatore Romano)

VATICAN CITY (CNS) -- Italian Cardinal Carlo Maria Martini, a renowned biblical scholar and former archbishop of Milan, died Aug. 31 at the age of 85 after a long battle with Parkinson's disease.

Pope Benedict XVI met privately with the cardinal during a visit to Milan in June, and was informed of his ailing health Aug. 30, the Vatican press office said.

In a telegram to Cardinal Angelo Scola of Milan, Pope Benedict praised Cardinal Martini's generous service to the Gospel and the church and his "intense apostolic work" as a Jesuit, a professor and "authoritative biblicist."

As archbishop of Milan, the pope said, Cardinal Martini helped open for the church community "the treasures of the sacred Scriptures." The pope prayed that God would welcome the cardinal into "the heavenly Jerusalem."

The cardinal was a prolific author whose books were best-sellers in Italy and included everything from scholarly biblical exegesis to poetry and prayer guides.

He retired as archbishop of Milan in 2002, where he was known as a strong pastor and administrator, and as a very careful, thoughtful advocate of wider discussion and dialogue on some delicate and controversial church positions.

At various times, he expressed openness to the possibility of allowing married Latin-rite priests under certain circumstances, ordaining women as deacons and allowing Communion for some divorced Catholics in subsequent marriages not approved by the church.

During a special Synod of Bishops for Europe in 1999, he made waves when he proposed a new churchwide council or assembly to unravel "doctrinal and disciplinary knots" such as the shortage of priests, the role of women, the role of laity and the discipline of marriage. His carefully worded remarks reflected his belief that the church would benefit from a wider exercise of collegiality, or the shared responsibility of bishops for the governance of the church. The idea of a new council was not taken up formally by the synod.

Following his retirement, his interests focused on biblical studies, Catholic-Jewish dialogue and praying for peace in the Middle East.

In a September 2004 message to a symposium on the Holy Land and interreligious dialogue, the cardinal wrote that Christians who visit Jerusalem should suspend judgment on the political situation there and simply pray for both sides. The Israeli-Palestinian conflict had become so complicated and painful that even an expert would have trouble sorting it out, he said.

In a November 2004 speech at Rome's Gregorian University, he told Catholics they could not understand their faith unless they understood the Jewish faith practiced by Jesus and his disciples.

"It is vital for the church not only to understand the ancient covenant (between God and the Jewish people) which has endured for centuries in order to launch a fruitful dialogue, but also to deepen our own understanding of who we are as the church," he said.

Even in retirement, the cardinal kept up with issues of importance in the life of the church. He was sought after for interviews and frequently published opinion pieces in Italian newspapers.

After Pope Benedict eased restrictions on the celebration of the pre-Vatican II liturgy in 2007, Cardinal Martini wrote a newspaper column explaining why, even though he loved the Latin language and could even preach in Latin, he would not celebrate the old Mass.

He said he admired Pope Benedict "benevolence" in allowing Catholics "to praise God with ancient and new forms" by permitting wider use of the 1962 form of the Mass, but his experience as a bishop had convinced him of the importance of a common liturgical prayer to express Catholics' unity of belief.

The cardinal also said the reformed liturgy that came out of the Second Vatican Council marked "a real step forward" in nourishing Catholics "with the word of God, offered in a much more abundant way than before," with a much larger selection of Scripture readings.

In a 2008 book-length interview titled "Nighttime Conversations in Jerusalem," Cardinal Martini said Pope Paul VI's 1968 encyclical "Humanae Vitae" ("Of Human Life"), which taught that artificial birth control was morally wrong, led many Catholics to distance themselves from the church and from listening to and being challenged by the Catholic vision of human sexuality.

While not specifically addressing the morality of contraception, the cardinal said the church needed to take a more pastoral approach to questions of sexuality. "The church should always treat questions of sexuality and the family in such a way that a leading and decisive role is up to the responsibility of the person who loves," he said.

After his retirement in 2002, he moved to Jerusalem and purchased a burial plot there but returned to Milan after his health worsened in 2008. He died in a Jesuit retirement home near Milan, surrounded by his Jesuit confreres and members of his family.

When he was named archbishop of Milan, Cardinal Martini was the first Jesuit in 35 years to head an Italian archdiocese. Pope John Paul II ordained him an archbishop Jan. 6, 1980, in St. Peter's Basilica and named him a cardinal in 1983.

A well-known speaker and retreat master, he served as spiritual director of the U.S. bishops' spring meeting in Collegeville, Minn., in 1986. In that role, he conducted a day of recollection on the first day and presented a series of reflections during morning prayers throughout the meeting.

Cardinal Martini's death leaves the College of Cardinals with 206 members, 118 of whom are under the age of 80 and therefore eligible to vote in a conclave to elect a new pope.