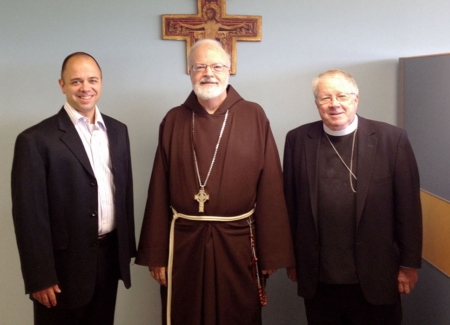 BRAINTREE -- After concluding his tenure as rector at St. John's Seminary in Brighton, Bishop Arthur L. Kennedy took up his duties as Episcopal Vicar for the New Evangelization with his new assistant Michael M. Lavigne on July 1.

The new office will follow the mandate set by Pope Benedict XVI when he appointed Archbishop Rino Fisichella to head the Pontifical Council for Promoting the New Evangelization. Bishop Kennedy said the new evangelization in the archdiocese will extend programs meant to get Catholics back to Church and regular faith life such as Catholics Come Home and Why Catholic?

"Our task now is to really begin to address the questions more methodologically, that have been identified in large measure by Pope Benedict and by this new council," he said.

Bishop Kennedy said Cardinal Seán P. O'Malley spurred the creation of the office out of concern for the need for a new evangelization, a concern that extends well beyond the archdiocese.

"This concern that he has, is a concern of basically the whole Church in the West," Bishop Kennedy said.

The bishop described the difference between "the old" evangelization, undertaken as the Gospel spread through a world unfamiliar with early Christianity, and the new evangelization, called for in the face of waning support in previously established strongholds of Christianity.

He said the two evangelizations exist alongside each other as some parts of the world find the message anew and some need the message renewed.

"The Church is growing in leaps and bounds in Africa and Asia, but it is becoming truncated in the West," he said.

Bishop Kennedy said his decades of experience in Catholic higher education prepared him for the new role at his office in the Pastoral Center.

"I just celebrated my 45th anniversary of ordination in December. My focus was basically evangelization that was engaged through the college university campuses. I taught theology for 32 years in Minnesota at The University of St. Thomas," the bishop said.

In that role, he said, he realized that as older people, who had been impacted by old cultural structures, began to retire from the institutions of the Church, younger people who came on as replacements were less grounded in a life of faith. In response, the bishop created programs to reinvigorate faith in the younger people as they came in without the robust understanding of the Church that older generations had.

He said the programs developed there helped younger people to bring "their faith into a coherent understanding." The bishop said after he left the position at the university, young people started attending programs there from all over the United States.

As rector of St. John's Seminary in Brighton from 2007 to June 30 of this year, Bishop Kennedy oversaw an increased number of seminarians enrolled, advanced the cardinal's goal of expanding the seminary to a regional presence, enhanced the seminary's national prominence in its academic and faith formation programs, and established new programs that prepare seminarians and lay leaders for the future.

His new role requires continued collaboration with the seminary, particularly where the programs to educate laity are concerned.

In March, collaboration between the cardinal and Bishop Kennedy culminated in the establishment of a new institute of faith formation at St. John's Seminary, called the Theological Institute for the New Evangelization, known as TINE. The TINE program includes Master of Arts in Ministry; certificates in catechesis, Scripture, and apologetics; and a degree program called the Master of Theological Studies for the New Evangelization.

"We have had some very good success already with the TINE program. In our TINE program in catechesis we have trained almost 300 people," the bishop said.

Lay people with such training can form a backbone for the new office's plan of putting parish life at the center of the new evangelization, a stated goal of the bishop and his assistant Michael Lavigne.

"I think we are very fortunate having Michael with us as we begin this project, because he has got a lot of worth specifically in what the cardinal wants. Namely, his vision is that the new evangelization comes to life within each individual parish, so that is the key," the bishop said.

Lavigne comes to the archdiocese from the Diocese of Portland, Maine, where he served as the director for the Office of Lifelong Faith Formation for three years, before heading south to join the Archdiocese of Boston.

Lavigne spent 18 years throughout his career working in religious education, youth ministry, and continued formation for people of all ages in his experience working for the Church in Rhode Island and Maine.

"I think it is important that we help a community to form disciples of Christ who are knowledgeable, in love with their faith, and joyful. Get them in front of as many people as possible. That is the difference maker," he said.

Lavigne described potential new initiatives proposed by the new office as they began their duties in July.

The office prepares for the Year of Faith, which Lavigne said the diocese will begin with a Mass on Oct. 11 and end with a Mass on Nov. 4, 2013, with speakers, media initiatives and celebrations.

He added that if the cardinal approves the pastoral planning model proposing that pastoral teams serve multiple parishes, the new office will be intimately involved in the transition.

In pastoral planning meetings earlier in the year, training was identified as a key point to sustain parishes if the new model moves forward. Lavigne said the new office will work in that area.

"Primarily, we would focus on the new evangelization and helping pastors, parishes and teams to be prepared to live that out in their collaboratives," he said.

As part of that, the Lavigne hopes to create four new retreat experience programs so that "pastoral teams can use this as a moment of conversion and of teaching the lay people in the parishes about the new evangelization."

"We want to be as flexible as possible to help parishes," Lavigne said.

Bishop Kennedy said these kinds of programs will play an integral role in the new evangelization in Boston as lay people realize more fully their unity with the Church and the clergy.

"Everything you do is tied to something that will last forever. What it is that ties you to something that will last forever is being in love with God. Because it is being in love with God that opens up the things that you do that are related to what God calls you to do and to be, that now suddenly takes on a significance that it could never have if you just did these things on your own and for your own self-satisfaction or self-fulfillment," the bishop said.