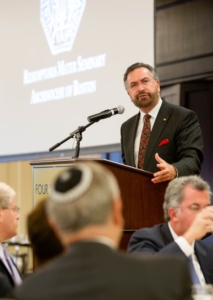 NORWOOD -- The work of bringing Catholics and Jews together remains incomplete but is progressing, according to Rabbi David Rosen, guest of honor at the Third Annual Gala Dinner supporting the Redemptoris Mater Archdiocesan Missionary Seminary of Boston on June 24.

Boston's Redemptoris Mater Seminary was erected by Cardinal O'Malley is 2006. The vocations of the Redemptoris Mater arise from the Neocatechumenal Way, an international itinerary of faith formation within the Catholic Church. The men ordained from the seminary are ordained for the Archdiocese of Boston; however, they are also willing to serve the Church anywhere in the country or the world that they are needed and that the archbishop chooses to send them.

In November 2005 he was made a papal Knight Commander of the Order of St Gregory the Great for his contribution to promoting Catholic-Jewish reconciliation.

"It is not only a great joy to receive this recognition from you, but to receive it in Boston with the special Irish connection, and indeed in terms of my own work specifically with the Catholic Church and of Boston's unique standing in the Catholic world, and especially out of the very special friendship that has emerged with the Neocatechumenal Way, this honor has so many wonderful additional dimensions to it that it brings me much joy and profound gratitude," Rabbi Rosen told nearly 500 supporters of the seminary.

Rabbi Rosen recalled working with the gala's previous guest of honor, the late Archbishop Pietro Sambi, who had been apostolic nuncio to Israel and Cyprus before coming to the U.S., during the time full diplomatic relations were established between Israel and the Holy See.

"He was indeed a very, very special individual, and therefore it is another humbling aspect of this honor to follow him," Rabbi Rosen said.

He spoke following a video presentation on the realities of improving Jewish-Catholic dialogue in the context of the Vatican II declaration "Nostra Aetate," "On the relation of the Church to non-Christian religions," proclaimed by Pope Paul VI on Oct. 28, 1965. The video was introduced by Father Antonio F. Medeiros, rector of Redemptoris Mater Seminary.

"One of the problematic aspects of the success of Christian-Jewish reconciliation in our time is that this tragic past has often been forgotten or unknown to the younger generations and thus the significance of the transformation is not fully grasped," he said.

Rabbi Rosen said he recalled this history in his talk to emphasize the dramatic change reiterated through early rejection of anti-Semitism by some Christians, bolstered by Catholic support for Jews during the Holocaust, and culminated in the fourth section of "Nostra Aetate" in 1965.

"I only dwell upon that tragic history this evening simply in order to emphasize the enormity of the significance of 'Nostra Aetate' and what has followed -- in the documents and the teaching of the Magisterium -- that has led to this blessed age in Catholic-Jewish relations, of which we are the beneficiaries," he said.

He said a view of Jews as being in league with the devil and guilty of deicide had been formally and officially rejected by the Church as early as the Council of Trent after 1545.

"It stressed the responsibility for the death of Jesus as upon all humanity, and especially Christians themselves," he said.

But he said the movement toward reconciliation between Jews and Catholics received greatest momentum in the Shoah, or Holocaust, when many Catholics stood in solidarity with the Jewish people-- and in cases died alongside them -- in the face of unparalleled state-sponsored murder.

He said the momentum culminated in the 1960s with "Nostra Aetate," which pushed back against centuries of violence and repression.

He said the declaration "categorically condemned anti-Semitism, which John Paul II subsequently referred to as a sin against God and man."

Popes John Paul II and Benedict XVI moved the dialogue forward in recent years with public expressions of support for the Jewish people, he said.

"It was John Paul II's profound understanding of the power of images and their capability through modern media to reach millions that broadcast to the world the rediscovered brotherhood and love between the Church and the Jewish people," he said.

"In Pope Benedict XVI's visit to the synagogue in Rome, and in his visit to the Holy Land, in showing respect to Israel's highest elected officials as well as its religious representatives, Benedict has in fact internalized the structure or the form of these events into the very body of the institution of the papacy itself, and therefore has in fact taken John Paul's initiative to another level," Rabbi Rosen said.

He also pointed to unique opportunities to forward Jewish-Catholic reconciliation in the historical and social context of the United States.

"The United States of America is arguably the ultimate success story in this regard, for it is here that one finds vibrant and self-confident Jewish and Catholic communities living alongside one another, both minorities, neither dominant, but each feeling fully part of and committed to the society at large," he said.

He said this relationship has allowed the two communities to "trail-blaze" for improvement in education, culture and cooperation.

But he said the traditions must be continued for younger generations.

"It is here that the role of educational and formation structures is so important, and where the work of the movements -- in particular the Neocatechumenal Way -- has become so critical," he said.

"As one of the most powerful of these Catholic movements, especially in the Spanish-speaking world, but indeed across the globe, the profound commitment of the Neocatechumenal Way to ensuring that the pathway of 'Nostra Aetate' becomes the highway of the Church is of inestimable importance," Rabbi Rosen said.

After the rabbi spoke, the seminarians of Redemptoris Mater sang "Shema Israel," a song based on one of the most important Jewish prayers, to honor the speaker and the message.

After closing the dinner in prayer, Cardinal Seán P. O'Malley shared his thoughts about the purpose of the gala dinner for the archdiocese.

"It is our way of celebrating the presence of the seminary and the vocations of our seminarians, but it is also a realization of the very deep commitment that they have to the interfaith mission of our Church, particularly our relationships with the Jewish community. The presence of Rabbi David Rosen and so many Jewish leaders here is just indicative of in what great esteem the Neocatechumenal Way is held by the Jewish community throughout the world," he told The Pilot.

Robert Leikind, director of the Boston Chapter of the American Jewish Committee, shared his thoughts on the event as history unfolds in Jewish-Catholic relations.

"We are witnessing a new age. Events like this are an expression of this transformed age, and they are also seeds that help build new relationships and advance the discourse that is helping to change our communities," he said.

The archdiocesan liaison to the Jewish community, Father David C. Michael gave his thoughts on the speaker and the meaning of the night for Catholic and Jewish communities in Boston.

"Reaching out in love and understanding to one another, that is an important place to begin. Then we have to deepen that relationship, that's where the hard work begins. The hard work begins in the deepening," he said.

"I think that his quote of John Paul II was absolutely on target where the pope says before we can be a blessing to the nations we have to be a blessing to one another," Father Michael said.