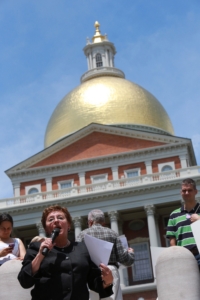 Janet Benestad, director of the Office of Faith Formation and Evangelization for the Archdiocese of Boston speaks at the Stand Up For Religious Freedom rally June 8 on Boston Common. Pilot photo/ George Martell, Pilot Media Group

BOSTON -- Hundreds gathered on Boston Common across from the State House on June 8 for the Stand Up For Religious Freedom rally that coincided with 160 simultaneous rallies in cities across the United States.

Former mayor of Boston and ambassador to the Vatican Raymond Flynn kicked off the rally by invoking the tradition of defending American rights on that very spot.

"You know I have been in politics now a little more than 50 years and I cannot imagine that in the year 2012 we would be once again gathered here fighting for our religious freedom, but here we are. It goes to show you that every once in a while, we have to be really active in defending what our values are and our beliefs," Flynn said.

Organized locally, and coordinated nationally by the Pro-Life Action League in Chicago and Citizens for a Pro-Life Society in Michigan, the rallies channeled voices in opposition to the decision by the U.S. Department of Health and Human Services to require most Catholic organizations and employers to provide health plan coverage for contraceptives, sterilization and some abortion-inducing drugs or face stiff fines.

Flynn observed that the political implications of such rallies, taking hold locally and nationally, sends a message well past the steps across the street from Beacon Hill.

He recalled thinking that morning that "it really doesn't take a lot of people to make a movement."

"I have seen that, I have experienced that over the years," he said.

The rally commemorated the date of June 8, 1789, when James Madison introduced the Bill of Rights into the first congress.

Director of the Office of Faith Formation and Evangelization Janet Benestad said an early draft by Madison asserted "that the civil rights of none shall be abridged on account of religious belief or worship, nor shall any religion be established, nor shall the full and equal rights of conscience be in any manner or on any pretext infringed."

"Well, today, we meet here, and we gather, and we prevail upon our government to actually bring its regulations in line with this amendment introduced 223 years ago, and with current federal law regulations which provide exemptions to protect conscience rights of religious institutions and individuals," she said.

Though organizers planned the event on a grassroots level independent from the Archdiocese of Boston or the USCCB, the rally set the stage for the upcoming 14-day campaign "the Fortnight for Freedom."

In April, the United States Conference of Catholic Bishops published a 12-page statement by their Ad Hoc Committee on Religious Liberty entitled "Our First, Most Cherished Liberty." The document called for "a fortnight for freedom," and began a nation-wide buildup for the event coming later this month. The fortnight begins on June 21 and ends on July 4.

Benestad pointed to the significance of the June 21 start date.

"In the Catholic tradition ... June 21st is the vigil of the feasts of the great Saints John Fisher and Thomas More, both of them English martyrs for the faith. Henry VIII tried to force both of them to violate their consciences, for which they died. This special period of prayer and public action emphasizes our Christian and our American heritage together and our commitment, through both, to our first and most cherished liberty," she said.

Benestad invited the crowd to continue their efforts opposing the HHS mandate, by joining Cardinal Seán P. O'Malley during the Fortnight for Freedom.

She invited those at the rally to join the cardinal, Catholics and fellow citizens for a live Town Hall Meeting on religious liberty in Watertown on June 25 at 8:00 p.m. at Catholic TV for simultaneous broadcast on WQOM 1060AM radio "to observe this fourteen days of standing up for religious liberty."

Since it was announced last year, the U.S. bishops have strongly advocated for an expansion of the mandate's exceptionally narrow religious exemption.

Benestad said the mandate with the narrow exemption could force Catholics to redirect charitable services -- traditionally provided unilaterally without respect to ethnic, racial, political or religious beliefs -- to Catholics only.

"That is unacceptable. Both the mandate and the compromise are a violation of the First Amendment protections of religious belief. Catholic institutions and religious institutions would violate their own identity if they refused to serve non-Catholics. We cannot do that," she said.

Local conservative pundit Don Feder also spoke at the rally about his grandfather, Israel Whitman, who came to the United States more than 100 years ago as he fled religious persecution of his Jewish faith.

"He found the streets lined not with gold but with something far more valuable -- human rights. We are here today to confront discrimination and persecution of a different kind," Feder said.

He warned about the dangers of a government overreaching the power of the people and their human rights.

"Remember, my friends, what starts small -- with a mandate -- often ends in repression, bloodshed and terror," he said.

"First morality and religion fall. Then our constitutional republic is replaced by a government that rests on different principles -- principles that my grandfather fled from over a hundred years ago. That's why, ladies and gentlemen, those of us here today aren't just Catholics, Protestants, Jews Evangelicals, Mormons; we are patriots," he said.