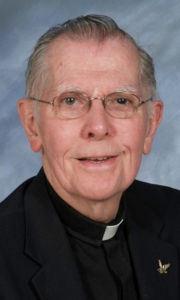 DANVERS -- Although Father Gerard Dorgan, the pastor of St. Mary of the Annunciation Parish in Danvers for the past 21 years, is "retiring" as of June 5, he hopes to continue ministering at Beverly Hospital, as well as the hospice house operated by his parish.

"It's a busy life, but it's a happy life," Father Dorgan said.

Father Dorgan was born Oct. 12, 1933. The youngest of four siblings, he is a son of St. John Parish in Peabody. He attended St. John's Seminary and was ordained in 1958 at the Cathedral of the Holy Cross by Cardinal Richard Cushing.

His first assignment was at St. Margaret Mary Parish in Westwood, where he was parochial vicar. After only seven months, he became part of the faculty of Cardinal O'Connell Seminary in Jamaica Plain, a college seminary for men entering the priesthood, where he taught English, as well as public speaking.

When the college seminary was merged with St. John's Seminary in Brighton in 1968, Father Dorgan became a professor at St. John's. He taught there until 1991.

In addition to teaching at the seminary, Father Dorgan also assisted on weekends at St. James Parish in Salem for 18 years, from 1958 until 1976.

In 1976, Father Dorgan continued his weekend ministry at a new parish, helping at St. Mary of the Annunciation Parish in Danvers.

"That was a very interesting time," he recalled. "With the Second Vatican Council and all the changes it brought about in the parishes -- such as celebrating Mass in the vernacular -- it was a great time to be a priest."

Father Dorgan recounted that during the first weekend when the Mass was to be proclaimed in the vernacular, he was at UMass Amherst, where he was writing his thesis on Emily Dickinson's use of the Bible in her poetry.

"Because it was the first time Mass was to be said in English, I drove back to St. Mary's that weekend just to be a part of it," he said.

In 1991, Father Dorgan became pastor of St. Mary's, where he continues today.

In addition to Father Dorgan's weekend ministry and his professorship at the seminary, he was also one of the hosts of WEEI's weekly radio show entitled, "Topic Religion." Father Dorgan co-hosted the radio show for three years, together with a Jewish rabbi and a Protestant minister.

"Once a month, all three of us would be on the show together. The other three weeks, we would take turns being on the show, and could bring in anyone we thought would be interesting," he explained.

"I used to parade a lot of interesting folks on that show," he said.

When he leaves St. Mary's on June 5, Father Dorgan will move back to his boyhood home in Peabody with his older sister.