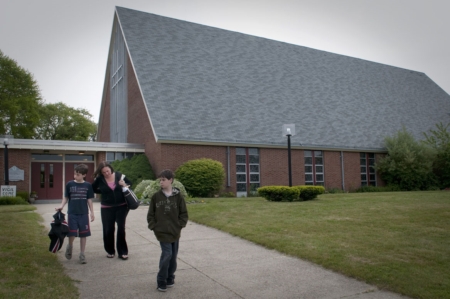 Christine Arnold and her sons Scott and Christian leave St. Frances Xavier Cabrini Church after spending the night at the church in Scituate, Mass., in May 2010. CNS photo/Jodi Hilton

SCITUATE -- The Archdiocese of Boston called for the end of an eight-year vigil at a former church in Scituate, after the Vatican upheld the decision of the archdiocese to convert the building for secular use.

The Congregation for the Clergy sent the archdiocese notification on May 4 that they upheld the decision to declare St. Frances X. Cabrini Church "relegated for profane use."

"Once a church is relegated to profane use, it will no longer be used for Catholic liturgical worship," archdiocese spokesman Terry Donilon said.

The relegation allows the archdiocese to then sell the church for "appropriate and dignified" use but not for "sordid use," one that is immoral or offensive to Catholics.

The archdiocese sold the former rectory earlier this year.

The parish was "suppressed" or dissolved under Church law, in 2004. Former-parishioners in Scituate exhausted all appeals allowed under Canon Law as they attempted to fight suppression, from 2004 through 2011, even appealing directly to Pope Benedict XVI.

With those appeals exhausted, former parishioners have directed their appeals at preventing the church building from being converted to secular use.

In recent months, the Vatican has prevented U.S. dioceses from selling some closed church buildings.

The former parishioners currently maintain their vigil with a rotating schedule of volunteers who stay at the church at all hours. Volunteers have amenities such as beds and Internet access, an upgraded heating system paid for by the group, and hold regular worship services not sanctioned by the archdiocese.

"Out of pastoral concern for all impacted by the closing of St. Frances, the archdiocese has allowed the vigil to continue for several years. For the good of our Catholic family, the time has come for this vigil to end," Donilon said.

With the news of the rejection of the appeal by the Congregation for the Clergy, the former parishioners can appeal twice to the Vatican high court, the Apostolic Signatura: once to a panel and, if that is not successful, to the entire body, according to a canon lawyer consulted by The Pilot.

The Signatura will rule not based on the merit of the argument in favor of keeping the church open, but on whether or not the archdiocese followed Canon Law procedures correctly in the process of relegation.

The archdiocese called for the former parishioners to return to the Church by joining a nearby parish in the statement issued Monday.

"The Archdiocese continues to work toward a peaceful and prayerful resolution to this vigil. The reality is that those who are participating in this protest are missing out on the fullness of parish life by refusing to end their protest," the archdiocese said.