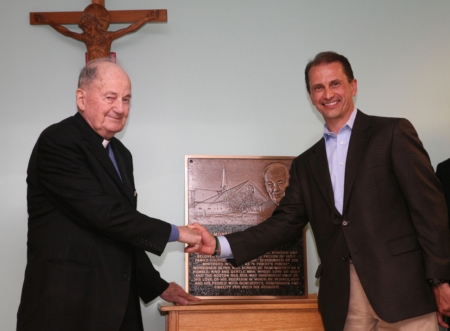 DUXBURY -- Parishioners of Holy Family Parish in Duxbury fulfilled a life-long goal for a beloved former pastor when they "burned the mortgage" at a celebration of the anniversary of his ordination, on April 28.

After raising more than $300,000 through a committee headed by parishioner Tom Guilfoyle the parish celebrated the final payment in conjunction with the anniversary of Msgr. William F. Glynn, 89, who was ordained 65 years ago.

Mary Shea DiCenzo worked for Msgr. Glynn at Holy Family for 22 years, and now works at St. Elizabeth's in Milton. She said paying off the mortgage was one of Msgr. Glynn's major goals, so once the money was raised, the parish got a copy of the mortgage from the Archdiocese of Boston to celebrate.

"We literally burned the mortgage," she said.

Over the years through collections in the pews, donations from parishioners, and a final push from the committee created to complete the payment process the parish paid down $3.3 million mortgage.

Msgr. Glynn celebrated a Mass at Holy Family Parish for the occasion.

At the celebration, the committee and guests dedicated the new parish center to Msgr. Glynn and unveiled a plaque with the priest's likeness on it.

Msgr. Glynn said he was ready for the burning of the mortgage, but the honors took him by surprise.

"They are also going to put a plaque up on the wall. I wasn't ready for that either," he said.

In another surprise, DiCenzo brought family members of Msgr. Glynn from Ireland to see the priest at the rectory the evening before the celebration.

"He could not believe it. He was totally shocked," DiCenzo said.

After serving several parishes Msgr. Glynn retired as pastor of Holy Family Parish in Duxbury on June 30, 2007. He had served as the pastor of the South Shore parish since September 1981.

"It has been a great life here in Duxbury," he said.

Over the years Msgr. Glynn had a 20-year career at the archdiocesan office for the Society of the Propagation of the Faith and as pastor in parishes throughout the archdiocese.

"You meet some great people regardless of where you go, whether it was Beverly or Wrentham, or St. Catherine's Somerville, or St. Gregory's Dorchester," he said.

Msgr. Glynn said when he arrived the parish had a very small church, and the cost of the mortgage included buying land and building the new church on the sight.

He thanked the former chancellor of the archdiocese Paul Devlin at the Mass.

"He had great hope in the future by allowing us to borrow that sum of money," Msgr. Glynn said.

The plaque to be installed at the church calls Msgr. Glynn a "priest's priest," and on the day that he spoke with The Pilot he confirmed his care for the priests.

In the spirit of care for priests and the priesthood, he repeated a message he gave in his homily. He pointed to the need for young men to step up and serve in the priesthood, and called upon lay people to encourage vocations.

"It has been a great life to have been a priest. I regret that there are not more vocations," he said.