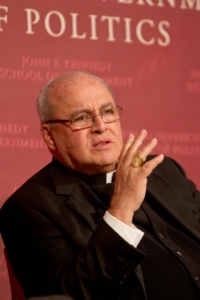 He made his remarks as part of a forum entitled "Church and Community: The Role of the Catholic Church in Cuba" at the Harvard University Kennedy School of Government. The forum was sponsored by the David Rockefeller Center of Latin American Studies of Harvard University.

Together with Cardinal Seán P. O'Malley, Archbishop of Boston, Cardinal Ortega presented his view of the role the Church has played in Cuba during the recent past, and his vision for the future.

"The Church is living a spring of faith in Cuba," Cardinal Ortega said. "There is a profound reawakening of the Church."

"We are aware that the footsteps of [Pope Benedict XVI's] visit have left the Cuban people well impressed by his meekness and kindness," Cardinal Ortega said, adding that the enthusiasm following the pontiff's visit to Cuba "will be a special occasion to delve more deeply into that faith that we have seen living in the hearts of our Cuban brothers and sisters."

"There remains then a profound feeling of gratitude and hope in our Church in Cuba and in all our people through the visit of Pope Benedict XVI," he said.

Echoing Cardinal Ortega's words, Cardinal O'Malley also noted that the Church in Cuba has seen great growth since Pope John Paul II made his historic visit to the island nation.

"I am truly amazed to see the progress the Church has made," Cardinal O'Malley said. "I know the Church will continue to play a crucial role."

During the question and answer portion of the forum, moderator Jorge Dominguez, vice provost for international affairs at Harvard University, asked Cardinal Ortega to respond to criticisms made by exile groups in Miami that claim the cardinal is too close to Cuban president Raul Castro's regime.

"From the start of the difficult years of persecution in Cuba there have been criticisms of the bishops of Cuba from the left and from the right, and also within the Church," Cardinal Ortega replied.

"If you start thinking of the Church as a political organization -- many would like us to be the opposition party in Cuba -- but we cannot be that," he added. "It goes against the nature of the Church."

Cardinal Ortega acknowledged the "wounds" suffered by the Cuban people, both those living in Cuba and those who have fled the country. "But these wounds have not been caused by the Church. The Church has suffered these wounds as well," he said.

When asked about a widely publicized incident that occurred days before the March papal visit to Cuba in which 13 protesters were removed by police from the Minor Basilica at the Church of Our Lady of Charity in Havana, Cardinal Ortega emphatically defended his actions.

Suggesting that the protest was staged "by people in Florida," the cardinal called the 13 protesters "former delinquents" and stressed that, contrary to media reports, none of them were physically harmed in any way.

He also spoke of the need for reconciliation between all Cubans, a topic Pope Benedict XVI stressed during his papal visit last month.

"If the exile community is going to have a role in the new Cuba, they need to start now...by building bridges," the cardinal said.

Cardinal Ortega's comments sparked a flurry of criticism from members of the Cuban exile community in the United States.

Typical of the reaction was an April 29 statement posted in the web site of the Asamblea de la Resistencia Cubana (Assembly of the Cuban Resistance).

"Our exile community, contrary to what the Cardinal intends to project, is proof of the capacity of reconciliation between Cubans and is an example of true solidarity with those who suffer the lack of fundamental freedoms and rights in the island," the statement said.

"The fact that Cardinal Ortega utilizes the same detrimental language which the regime of Havana uses, referring to a group of Cubans who entered the Sanctuary of God to call attention on the lack of rights in Cuba reflects that of the oppressors of the Cuban people," it continued.

According to Mario Paredes, presidential liaison for Roman Catholic Ministries for the American Bible Society, who helped coordinate Cardinal Ortega's visit to the United States, this criticism is to be expected.

"Now that the Church is expanding and gaining footing in Cuba, there is likely going to be added criticisms from those on the outside," he said in an April 27 the telephone interview with The Pilot.

"The fact that [Cardinal Ortega] doesn't criticize the regime directly is seen as his collaborating with the regime, which is untrue," Paredes said.

"The Cardinal is doing what he is supposed to do," he continued, noting that the cardinal's role is "to bring people to faith, to call on collaboration in rebuilding Cuba, to bring Cubans to reconciliation."

"It's very hard for people to understand his role," he said.

During his trip to the United States, Cardinal Ortega also spoke at Boston College, the Catholic Center at Harvard University and the Council of Foreign Relations in New York City.