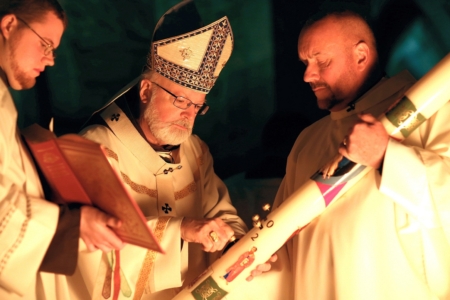 'On Saturday night, we celebrated the Easter Vigil in the Cathedral. The vigil begins with the Blessing of the Easter Fire.' Pilot photo/CardinalSeansBlog.org

I hope you all had a very blessed Triduum and Easter! Before we get too far afield from Holy Week, I wanted to share with you some of my activities for the week.

On Thursday evening, we gathered for the Mass of the Last Supper. This celebration is full of meaning for Catholics, because it was on the night of his betrayal that Christ instituted the Eucharist and the priesthood. Following the homily, we have the Washing of Feet. It commemorates that, during the last Supper, Jesus took the role of a servant -- the lowest place -- washing the feet of his disciples, telling them "Love one another as I have loved you." After the Washing of Feet, we have the Liturgy of the Eucharist. We remember that on the night he was betrayed, Jesus asked his disciples to stay awake with him in the Garden of Gethsemane. So, after the Mass, we do not have the usual blessing and dismissal. Instead the Blessed Sacrament is taken to a place of repose, where we remain with him.

On Good Friday we remember Christ's suffering and death on the Cross. One of the traditional observances of the Good Friday is the Way of the Cross. A number of groups hold processions throughout the archdiocese and some of them stop at the cathedral. One of the groups that comes each year is the one from Communion and Liberation. They hold a Way of the Cross that goes through Boston Common. I was very pleased to meet a woman named Sarah who was one of the pilgrims. She is about 30 now, but when she was just a baby I understand she had seizures that left her with many disabilities. It was wonderful to see that she made the Way of the Cross and also how lovingly she is cared for by her mother Carol and all those around her. Then, at 3 o'clock we had the celebration of the Veneration of the Cross.

On Saturday night, we celebrated the Easter Vigil in the Cathedral. The vigil begins with the Blessing of the Easter Fire. The Paschal candle, which represents Christ, is lit from a fire and we carve on it the sign of the cross as we say: "Christ yesterday and today, the Beginning and the End" and then we make other signs that also carry great symbolism, including the Alpha and Omega characters, in reference to the book of revelation in which Christ referred to as the "Alpha and the Omega, the first and the last." At the Easter Vigil we bless the baptismal water before baptizing new converts. During the blessing, the paschal candle is immersed in the water. Christ is Risen!