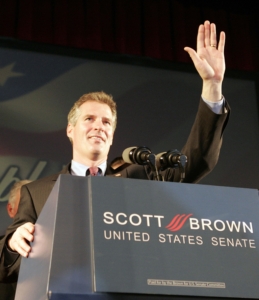 U.S. Sen. Scott Brown waves to supporters during a rally in Boston in 2010. He came under fire last week for a radio ad stressing his support for a conscience exemption to the HHS contraceptive mandate. CNS file photo/Adam Hunger, Reuters

BOSTON -- U.S. Senator Scott Brown (R-Mass.) came under fire last week for a radio ad stressing his support for a conscience exemption to the HHS contraceptive mandate and arguing that the late Democratic Sen. Ted Kennedy would have supported the exemption.

"Religious freedom has always been one of our most precious rights. It's what brought the Pilgrims to our shores hundreds of years ago -- so they could freely practice their faith," Sen. Brown says in the ad that began running Feb. 23. "That's why I'm concerned about a new federal mandate forcing religious organizations to offer insurance coverage for practices that go against the teachings of their church."

"Like Ted Kennedy before me, I support a conscience exemption in health care for Catholics and other people of faith. I believe it's possible to provide people with access to the health care they want, while at the same time protecting the rights of Americans to follow their religious beliefs."

Brown characterized the exemption as "a matter of fundamental fairness" that should be provided to all Americans of every party and faith.

Brown's staff has pointed to the example of unsuccessful 1997 health insurance legislation drafted by Sen. Kennedy. The bill said that health insurance issuers may inform enrollees of coverage limitations based on the "religious or moral convictions" of the issuer.

But a former Kennedy staffer challenged that interpretation, telling the Massachusetts newspaper The Republican that the bill did not mandate any benefits and was not meant to endorse such exemptions.

Brown has also cited 1995 legislation sponsored by Kennedy which included a provision preventing a doctor or hospital from being forced to perform a procedure in violation of their personal beliefs.

The senator said his evidence includes a letter from Kennedy to the pope.

In a 2009 letter to Pope Benedict XVI, Sen. Kennedy said, "I believe in a conscience protection for Catholics in the health care field and will continue to advocate for it as my colleagues in the Senate and I work to develop an overall national health policy that guarantees health care for everyone."

Sen. Kennedy's son, former U.S. Rep. Patrick Kennedy, also asked that the ad be pulled. He said that his father agreed that health care providers like doctors and hospitals should be allowed a conscience exemption for performing any service. But his father would have opposed the Blunt amendment, he said.

The Respect for Rights of Conscience Act, also known as the Blunt amendment, was tabled by the U.S. Senate in a 51-48 vote March 1. The amendment, attached to a key highway bill, would guarantee the protection of conscience rights in all aspects of implementation of the health care reform law. Brown voted in favor of the amendment while Sen. John Kerry, voted against it.

According to the Associated Press, Brown said Feb. 27 he would not be pressured into pulling the ad.

Warren said the amendment would have created a hole in health care coverage and could result in women being denied "preventive health care" for any reason.

The Brown campaign ad was finally replaced March 2 with a new ad on Brown's support of allowing women to serve in combat roles. Brown's spokesman told the Boston Globe that the previous ad ''ran for a week, which is the usual cycle for the Scott Brown radio reports.''