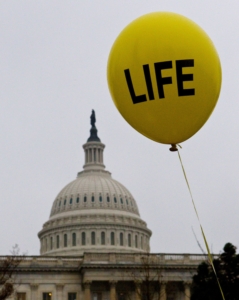 The annual March for Life rally took place in Washington Jan. 23. The pro-life demonstration marks the anniversary of the 1973 Supreme Court decision that legalized abortion across the nation. Pilot photo/Gregory L. Tracy

BRAINTREE -- Before the sun came up on Jan. 22 nearly 500 students from parishes and schools of the Archdiocese of Boston sat packed tightly on buses underway to the Youth Pilgrimage for Life to Washington, D.C. for the March for Life.

The Pilot embedded with high school students for the trip. The casual observer might have expected to see crabby, sleeping, or complaining teenagers, instead a group of enthused --but a bit tired -- young people ready to march to defend the Catholic belief that all life is good in the eyes of God.

Father Sean Maher, the parochial vicar at Holy Family, in Duxbury, Mass., set the tone with a chant that the pilgrims responded to.

"Pilgrimage," they shouted back.

"Vacation," they shouted back.

"And we never," he shouted.

"Complain," they shouted back.

"Anything," they shouted back.

"Pilgrimage," they shouted back.

From the time the bus left the Pastoral Center at 66 Brooks Drive until the time it arrived at Hylton Memorial Chapel in Woodbridge, Va., more than ten hours later, the students periodically broke into song. One song, "Mighty to Save," seemed omnipresent throughout the weekend-long pilgrimage. The students burst into that song just before arrival in Virginia.

At the chapel students rallied at the event "Life is Very Good." Students and group leaders sang, prayed, and received the Eucharist as Archbishop of the Archdiocese of Omaha, Neb., George J. Lucas celebrated the Mass.

"The kids were like," she said, leaning forward and widening her eyes in imitation.

In the homily, Father Searby laid bare the motivations for the pilgrimage and the March for Life in the context of Catholic teachings on the gospel of life.

He compared the struggle to fell abortion with the fall of the Berlin wall in 1989, "You are the hope of this country. You are the ones that will transform it so that abortion, and all of the other things that violate the dignity of human life, will just go away, not with a bang but with a whimper, and we will stand upon the wall. Not the wall that was graffitied and was surrounding the city, but the wall that separates human hearts from other hearts."

After the Mass and adoration Matt Maher performed for the 3500 students and leaders in attendance, as confirmed for The Pilot by staff at the chapel.

"HEY -- everyone who came to #LifeisVeryGood -- you guys brought it tonight! What an amazing night. Peace to all," he tweeted after the show. A tweet is a short message on a micro-blogging website called Twitter, and a group of words run together with a pound sign in front is called a hashtag.

Pilgrims from the Archdiocese of Boston crowded the stage to get close to the band, who emailed The Pilot as statement of thanks for the show of enthusiasm. Julie DiAngeles, youth minister at St. Joseph Parish in Wakefield, helped The Pilot make contact with Matt Maher.

"I think that it is a strong statement of this truth that the Church is alive in the Northeast, and she will not be swayed by the current of whatever is the modern socially acceptable trend. Her commitment to the authentic love of God and the weakest members of society is far too important than to cave in to the pressure of self exaltation," Maher said.

After the concert, the group had adoration and organizers invited them for the sacrament of reconciliation.

Christopher Loycano, a senior at Malden Catholic, said, "The energy in the crowd is amazing, and I'm ready for a good weekend."

Upon returning to the hotel where the pilgrims stayed, The Pilot only became aware of one noise complaint despite the group's energy levels after the concert.

Sticking out a tight schedule with no complaints on the Jan. 23 the day of the march, the pilgrims ate breakfast at 7 a.m. promptly, with 45 minutes to get themselves onto the bus.

The buses made the first stop of the day before the actual march at the Shrine of the Sacred Heart Church in Washington, D.C., for a rally with Father Matt Williams and a Mass celebrated by Cardinal Seán O'Malley.

Father Williams rallied the students to the power of the gospel of life before the Mass began.

"I thought Father had a really great message to relay to us that not everybody is trained to talk to different people, but we are all children of God and we are all valued. We all just need love, when it comes down to it," Daniel Fitzgerald, a senior at Malden Catholic High School, said.

Cardinal O'Malley then celebrated Mass for the pilgrims.

In his homily, relating a scene from the film "Children of Men." He described an intense scene which highlighted the emotional impact that the presence of a baby can have.

"When they carry the baby out of the building in the midst of a battle, and the baby cry, everybody stops. It was the first baby they had heard in 18 years,"

Then, back to the buses and off from there to the March for Life. The walk was relatively short from the busses up to the steps of the Supreme Court, where pilgrims prayed. In the sea of people group leaders and pilgrims struggled to stay together.

"I am more here to protect them, and guide them if they need any help, but this is really their show not mine," Tim Gannon, religion teacher at Cardinal Spellman High School, said.

To close the day of the March for Life, pilgrims took very brief periods to explore some of the monuments at Washington, D.C., and then some down time and pizza in the rectory at St. Mary's Church in Landover Hills Md.

After their meal and a brief rest, the pilgrims had adoration and again received reconciliation with Father Williams, Father Maher, and the priests from the area. The event provided a soft landing space for the young pilgrims who saw some disturbing images of aborted fetuses on display by other organizations at the march.

"After those rev-ups, if you will, and bringing it all to Christ and putting it there, and having that relationship and maybe for the first time realizing that you are not alone. They can rely on God and he is never going to let them down ever," said Kathy Stebbins, coordinator of youth ministry for the archdiocese, said.

The following day the pilgrims went to Mass at St. Patrick's Church in Washington, D.C. Again, the cardinal celebrated for them, and thanked them for their witness to the gospel of life.

"I would like to thank all of you for your presence on this pilgrimage for life," the cardinal said in his homily.

"Your presence here has meant so much, the brave things you did for those who look up to you," he said.

Before getting on the bus again for the long trip back to Boston, Juliana Joy Child, a sophomore from Cardinal Spellman High School, explained the song that the pilgrims sang at nearly all of the events on the pilgrimage.

"When I think of the song "Mighty to Save," I think of the fact that God will never give us anything that we cannot handle. He will always help us through it, no matter what. Being on this pro-life walk was something that made me feel mighty," she said.