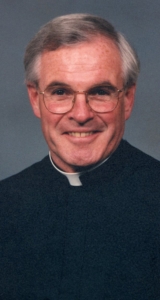 A Boston native, he was born in the Hub on Sept. 5, 1944 a son of the late Cornelius and Catherine Mullaney. He attended St. Mary of the Assumption grammar and high schools in Brookline before entering the archdiocesan seminaries, first at Cardinal O'Connell in Jamaica Plain and then at St. John, Brighton.

He served as deacon at Our Lady of Mercy Parish in Belmont prior to his ordination to the priesthood on May 15, 1971 at Holy Cross Cathedral. He was in the first class ordained by Archbishop Humberto Medeiros who had been installed as archbishop the previous October.

In the ensuing years of priestly ministry he has served in parishes across the archdiocese. His first assignment was as an associate at Our Lady of Good Voyage, Gloucester (1971-1976); then, again as associate, at St. Ann Parish, Somerville. In both parishes, he also helped in the formation of future priests serving as a deacon intern supervisor. In June 1985, he was named parochial vicar at St. Patrick, Natick and five years later to the same position just a couple towns away at St. Bernard in Newton.

He served for one term as pastor of St. Thomas More Parish, Braintree before becoming a member of the Team Ministry with Father Joseph Rossi at St. Pius Fifth Parish, Lynn in August 1999.

During the time of Father Mullaney's appointments on his various parish assignments, he was in large and busy parishes, often with several other priests, deacons -- both transitional and permanent, and staffs of women religious and lay people with whom he worked genially and well.

As noted above, Father Mullaney's health is the reason for his retirement.