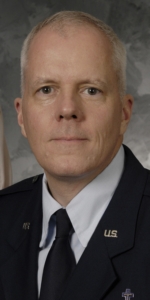 WASHINGTON, D.C. -- The United States Air Force (USAF) Reserve announced last week that former Vicar General and Moderator of the Curia Father Richard M. Erikson, a USAF colonel and military chaplain, has been selected for promotion to the rank of brigadier general. President Obama officially nominated Father Erikson for the promotion, and has submitted the nomination to the U.S. Senate for confirmation.

Father Erikson served as Vicar General and Moderator of the Curia for the Archdiocese of Boston from 2006 to 2011. He recently completed a sabbatical program at the Institute for Continuing Theological Education at the North American College in Rome.

Archbishop for the Military Services Timothy Broglio expressed his congratulations to Father Erikson.

"I am very pleased to learn about Father Erikson's selection. His service to the Air Force Chaplaincy has always been greatly appreciated and I know that he will continue to offer excellent leadership to those he is now called to serve in this Reserve capacity," Archbishop Broglio said.

"I am deeply honored by this nomination and deeply grateful for Archbishop Broglio's support and leadership over the years. I am looking forward to serving our troops, families and Chaplain Corps in this capacity,'' Father Erikson said.