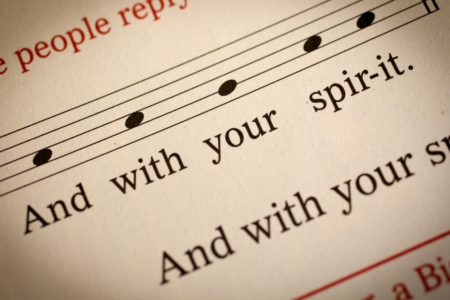 The people's response, "And with your spirit" shown on a page of the new English translation of the Roman Missal which was implemented at Masses for the First Sunday of Advent. Pilot photo/ Gregory L. Tracy

BRAINTREE -- After months of preparation, local pastors contacted by The Pilot said the implementation of the new translation of the Roman Missal this past weekend went relatively smoothly, though it still presents some challenges.

Generally, pastors described a favorable reaction from parishioners to the change in Mass language, but nearly all added that the change created more work for the priests than it did for parishioners. The priests said patience from everyone involved will help smooth the transition.

Father Phillip M. Conroy, pastor at St. John the Evangelist in Townsend, said he spent many hours studying the pages of the new missal, finding different sections, familiarizing himself with texts, and attending lectures. He even bought a CD to aid him in learning the new passages.

He spent much of the time making sure he knew which pages contained passages that are part of the Mass.

"If you don't know the book you're going to spend a lot of time fiddling," he said.

Many of the priests contacted told The Pilot that the changes come on the heels of at least some preparation within their parishes, in anticipation of and preparation for the change over to the new translation.

Efforts included classes, DVDs, and even Power Point presentations in some parishes.

"We had shown a rather short DVD -- about 23 minutes," said Father Richard P. Cornell, pastor at St. Cecilia in Ashland. "So, we showed half each week at Masses."

St. Cecilia also hosted four longer sessions to explain the changes to the missal, but Father Cornell said attendance turned out low for the events.

"Nonetheless I believe it certainly helped me, and it helped others who watched it," Father Cornell said of the DVD and the presentation.

Father Cornell said people in his parish tried very hard to remain responsive throughout the first Mass with the changes. "I was pleasantly surprised when we first did the entire thing on Saturday afternoon."

The pastor at Our Lady of Lourdes in Carver said he and his parishioners began preparing for the changes nearly a year ago.

Father Anthony Medairos said, "We thought it (the change) would happen last Advent, so we've made preparations."

In October, the Carver parish held a series of three presentations attended by over 250 parishioners.

"There was a Power Point presentation explaining why and what," Father Medairos said. "Our Mass attendance here is roughly 500, so getting 250 adults here is pretty good."

Father Walter J. Waldron, pastor at St. Patrick in Roxbury said, "As hard as it is for the people, it's as difficult for the priest."

Father Waldron said the changes in the preface and the Eucharistic Prayer, caused him to read from the book and to lose the connection that comes from eye contact with his congregation.

However, he noted that the changes bring the English-speaking community closer to what worshipers in other languages say. The Portuguese and Spanish-speakers already use translations closely matching the original Latin.

The new translation brings the English Mass greater universality within the liturgy, he said.

"We used to say, 'for all,' but now we say, 'for you and for many.' The Portuguese have had that all along. There are instances where they had kept much closer to the Latin than we had," he added.

"As difficult as it is to change, this change is a little easier than the change we went through at Vatican II. I think, and I've told people, that we will get used to it," Father Hines said.

While pew cards and other worship aids will continue to be necessary for a time, the priests said they expect adjustment to the changes to come along.

"I think after awhile people will come to know it, and they won't need the cards anymore, and it will be like it always was," said Father Conroy.

Many of the priests also said that they expect a new wave of adjustment as infrequent Mass-goers attend their first Mass of the liturgical year on Christmas.

Father Madeiros said, "Certainly our Christmas folks are going to be a little stymied, 'What, what, what?'"