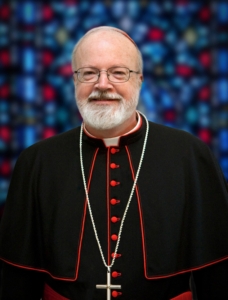 Patrick O'Malley was born in Lakewood, Ohio in the Diocese of Cleveland on June 29, 1944, the younger son of Theodore and Mary Louise (Reidy) O'Malley. He has an older brother, Theodore, and a younger sister, Mary.

His early education took place in Pennsylvania, in St. Gabriel School, Pittsburgh; Sacred Heart School, Reading; and St. Fidelis Minor Seminary in Butler. He continued his education at the Capuchin College and the Catholic University of America, both in Washington, D.C. He joined the Order of Friars Minor Capuchin, taking his first vows on July 14, 1965 and his perpetual vows on July 14, 1968. He was a member of the Province of St. Augustine. Upon profession, he took Seán, which is Irish for John. The Catholic University of America awarded him a master's degree in religious education and a doctorate in Spanish and Portuguese literature. He is a linguist, speaking English, Portuguese, and Spanish fluently, with an excellent knowledge of French, Italian, and German.

Friar Seán Patrick O'Malley was ordained a priest on Aug. 29, 1970 in the Church of St. Augustine, Pittsburgh, by Auxiliary Bishop John Bernard McDowell of Pittsburgh. While Father O'Malley had desired to be a missionary, he was assigned to minister to Spanish-speaking Catholics in the Archdiocese of Washington. From 1969 to 1973, he was a faculty member of his alma mater, the Catholic University of America. In 1973, he was named executive director of the archdiocese's Centro Catolico Hispano. Cardinal William Wakefield Baum named him episcopal vicar for the Hispanic, Portuguese, and Haitian communities and appointed him executive director of the Office of Social Ministry. Throughout his ministry in Washington, Father O'Malley was known for his dedication to the poor and marginalized and for his practice of evangelical poverty. Early in his ministry, he was recognized for his service to the Portuguese people by being named a knight commander of the Order of Infante D. Henrique by the Portuguese government.

On June 2, 1984, Blessed Pope John Paul II named Father O'Malley to be coadjutor bishop of St. Thomas in the United States Virgin Islands. His episcopal ordination took place on Aug. 2, 1984 in the Cathedral of Saints Peter and Paul in St. Thomas. He was ordained by Bishop Edward John Harper, C.Ss.R., of St. Thomas and his principal co-ordaining bishops were Archbishop James Aloysius Hickey of Washington and Washington Auxiliary Bishop Eugene Antonio Marino, S.S.J. He chose "Quodcumque Dixerit Facite" (Do whatever He tells you) as his episcopal motto.

In 1985, as coadjutor bishop, he ordained a young Paraguayan, Adalberto Martinez Flores, as a priest for the Diocese of St. Thomas. In 1997, Bishop O'Malley would have the joy of being a principal co-ordaining bishop at the ordination of Father Martinez as Auxiliary Bishop of Asuncion, Paraguay. In 1986, Bishop O'Malley ordained Pittsburgh native Elliot Griffin Thomas as a priest of the Diocese of St. Thomas and in 1993 he was a principal co-ordaining bishop when Father Thomas was ordained as his successor as Bishop of St. Thomas.

Upon the resignation of Bishop Harper, he succeeded to the See of St. Thomas on Oct. 16, 1985. His years in the Virgin Islands were noted for his ministry to the homeless and to persons with AIDS. In 1991 he was made an honorary chaplain of the Sovereign Military Order of Malta.

On June 16, 1992, Blessed Pope John Paul II named Bishop O'Malley the sixth Bishop of Fall River. He was installed in the Cathedral of St. Mary on Aug. 11, 1992. Bishop O'Malley was a great promoter of Catholic education and opened several new schools during his time as Fall River's bishop. His concern for the poor, sick, and marginalized continued to be an important part of his ministry. He showed great concern and compassion for immigrants and for those suffering from AIDS. He dealt with the victims of clerical sexual abuse with great sensitivity.

In November and December 1998, Bishop O'Malley was a member by papal nomination of the Special Assembly for Oceania of the Synod of Bishops. The pope's confidence in him was also shown by his appointment as an apostolic visitor for various seminaries in the Caribbean and in Central America.

The Holy Father named Bishop O'Malley to be the fourth Bishop of Palm Beach, Florida on Sept. 3, 2002 and he was installed in the Cathedral of St. Ignatius Loyola on Oct. 19, 2002. Bishop O'Malley came to a diocese which was severely shaken by the admissions of two successive bishops that they had sexually abused minors prior to their ministry as bishops. He brought the same sensitivity and concern to the Diocese of Palm Beach as he had shown in his previous assignments.

Less than ten months after his installation in Palm Beach, on July 1, 2003 Bishop O'Malley was promoted to the Metropolitan See of Boston. He was installed in the Cathedral of the Holy Cross on July 30, 2003.

On March 24, 2006, Pope Benedict XVI made Archbishop O'Malley a cardinal, giving him the red biretta and naming his cardinal priest of Santa Maria della Vittoria. He took possession of his titular church on Oct. 1, 2006.

He has served as principal co-ordaining bishop for four bishops: the two cited above while he was Bishop of Fall River as well as Bishops George W. Coleman of Fall River and Salvatore R. Matano of Burlington.

On May 31, 2010, Cardinal O'Malley was named apostolic visitor to the Archdiocese of Dublin in relation to the clerical sexual abuse scandal in that archdiocese.

From the time of his nomination as Archbishop of Boston, Cardinal O'Malley has devoted himself to healing the wounds of the clerical sexual abuse scandal with his habitual kindness and sensitivity. He has tackled the difficult issue of parochial reorganization, all the while tending to his duties as archbishop of a venerable and extensive archdiocese and a cardinal of the Holy Roman Church.