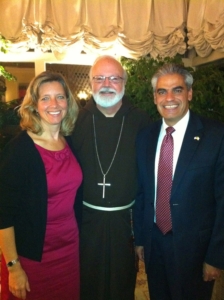 'That evening, the U.S. Ambassador to the Vatican, Miguel Diaz, and his wife, Marian, hosted a reception in honor of our visit.' Pilot photo/CardinalSeansBlog.org

As I mentioned in my last post, last Thursday (11/3) the bishops of the U.S. Bishops' Conference Region 1, which is made up of the six New England states, began our ad limina visit to the Holy See. Throughout the coming months, bishops from the other 14 U.S. regions will also make their ad limina visits. It's the practice in the Church that every five years each diocesan bishop, together with his auxiliaries, goes to visit the Holy Father, to make a report of the diocese and to pray at the tombs of the Apostles Peter and Paul. It is also a time when the bishops visit the various dicasteries, that is the departments, which make up the Roman Curia. It's always a very beautiful occasion, an opportunity for the bishops to reflect on our ministry, to pray together, to be with the Holy Father and to reconnect with the catholicity of the Church and our history, which is the history of the Apostles, the history of the Roman martyrs. It's also a wonderful opportunity of fraternity with all the bishops of the region. It provides us with time to pray and talk about the Church in our dioceses of New England. It also is an opportunity for us to visit our priests that are in Rome and the seminarians who are at the North American College.

On Sunday morning (11/6) I celebrated the Mass at Casa Santa Maria, the residence for American priests studying in Rome. Msgr. Francis Kelley is the rector; and Msgr. McCrae, who was with us for the meeting with the Holy Father, is the spiritual director. It's interesting that one of my predecessors, Cardinal William O'Connell, was at one time a rector back when the North American College was there. The building of Casa Santa Maria is very historical; it's at least 300 years old. It was originally a convent of cloistered Dominican nuns, and then it became the original site of the North American College. Then, once the new building was built for the North American College, it became the Casa Santa Maria. I took some pictures of the refectory there, because it had been renovated by Cardinal O'Connell and much of the work was paid for through the generosity of the Catholics of Lowell.

That afternoon I was pleased to be able to meet the new apostolic nuncio to the United States, Archbishop Carlo Maria Vigano. I did not know him before, and it was a chance for us to talk about the Church in the United States and his new mission here. I also expressed to him our sorrow at losing Archbishop Pietro Sambi so suddenly, but also our gratitude for all the good that he accomplished during all those years as the Holy Father's representative in our country. We look forward to Archbishop Vigano's arrival in Washington. He will be present with us for our bishops' meeting next week in Baltimore, and we pray that the Lord will bless his mission as Nuncio to the United States.

That evening (11/8), the U.S. Ambassador to the Vatican, Miguel Diaz, and his wife, Marian, hosted a reception in honor of our visit. The bishops of Region 1 and some of our guests were with us. I knew Miguel from my time in Palm Beach. He and his wife are both theologians; and he was teaching in the seminary and his wife was involved in evangelization programs for the Diocese of Palm Beach. During his remarks, he said that I had been the boss of both of them! He also said how important the diplomatic relations between the United States and the Holy See are. It is an opportunity to foster better communication between the Holy See and our government. In my remarks I added that that his "former boss" is very proud of the fact that two of his recent predecessors as Ambassadors to the Holy See have been Bostonians -- Ambassador Raymond Flynn and Ambassador MaryAnn Glendon.