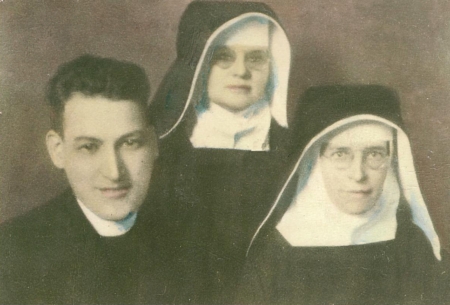 The Franciscan Missionary Sisters for Africa can best be described as absolutely heroic. The congregation's African missions are in Uganda, Kenya, Zambia, Zimbabwe, South Africa, and the Sudan. They also have houses in America, Ireland, Scotland, and England. However, a better way of describing the Franciscan Missionary Sisters for Africa is that they can be found wherever there are people in desperate need.

These Franciscan Sisters divide their ministries into health, social outreach, education and pastoral work. They provide home based care for people affected by the AIDS pandemic. They run medical clinics and administer many health care projects. They care for street children and orphans. They assist refugees living under the most difficult situations. They provide advocacy for the most marginalized members of society.

Were it not for his fragile health, Father Cushing would have been a missionary himself. So. he listened closely as Mother Kevin told him how her sisters established clinics and schools for the poor, and were caring for lepers. Father Cushing interrupted with, "All right, how much do you need?" Just as quickly, Mother Kevin responded, "Thirty thousand dollars." 1929 was when the Great Depression began. Nevertheless, Father Cushing managed to raise the money Mother Kevin needed.

In 1952, Archbishop Cushing presented the Sisters with a convent next to St. John's Seminary with a large barn that the Sisters renovated into a lovely Novitiate House. Two years later, he presided over the congregation's first reception of novices from the Archdiocese of Boston.

In a Foreword to the book 'Love Is The Answer' on Mother Kevin's life, Cardinal Cushing wrote: "She was the first missionary nun I had ever met. It was a privilege to know her, and to have been able to lend her a hand financially, in her stupendous undertakings."

Today, the Franciscan Missionary Sisters for Africa have over 700 members laboring in 60 missions.

Frank Mazzaglia is associated with the Missionary Alliance which is comprised of Religious missionary congregations of priests, sisters, brothers, and lay people whose members toil in the vineyards for Christ all over the world.