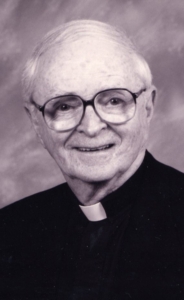 He loved to tell the story about his arrival at his first assignment, St. Mary Star of the Sea, Beverly in late 1953. The pastor of the parish, Msgr. John Degan had been at the helm of the parish for almost 40 years at the time. The newly ordained Father Regan was short and slight. When the two met for the first time, Msgr. Degan scanned from foot to head all five feet six or seven inches draped with maybe 150 pounds of Father Regan and when their eyes met the pastor said "In the name of God, where's the rest of you?"

Whatever his diminutive stature, he was by accounts of priest friends and contemporaries, and from parishioners as well, a stellar priest and a man of considerable if unassuming academic brilliance and accomplishment.

The only child of the late Francis and Julia (Murphy) Regan, he was born in Boston on Dec. 7, 1928. He grew up in the Hub's Jamaica Plain section. On graduation from high school he entered St. John's Seminary and on Sept. 29, 1953 Archbishop Richard Cushing ordained him to the priesthood at Holy Cross Cathedral. His class was moved along the seminary course of studies because of the increasing enrollment of the seminary. They were thus the "second class of 1953," the first having been ordained the previous February.

Following his first assignment at Beverly he was sent in 1956 to the Catholic University of America in the nation's capital for advanced theological studies; he was granted the Doctorate in Sacred Theology specializing in patristics, the study of the teachers and theologians who came soon after the apostles in the life of the early Church.

In June 1969 he was appointed to the faculty of Blessed John XXIII National Seminary, Weston where he taught patristics until his appointment as an associate pastor at Immaculate Conception Parish, Marlborough in June 1976.

At Marshfield he helped shape a parish that was growing rapidly in population as new families moved from Boston and its immediate southern suburbs to the more southerly towns of the archdiocese like Marshfield, an area sometimes dubbed the "Irish Riviera."

His first move in retirement was to Carmel Terrace and then as his health declined he moved to St. Patrick Manor, both under the care of the Carmelite Sisters of the Aged and Infirm in Framingham.

Father Regan's Funeral Mass was celebrated at St. Christine Church, Marshfield on Oct. 28, with South Regional Bishop John Dooher as the principal celebrant and Father Walter Keymont, pastor of St. John the Evangelist in East Bridgewater as the homilist.