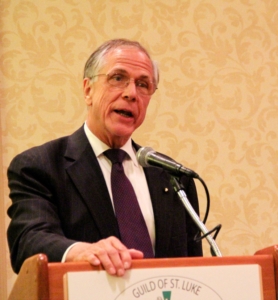 NEWTON -- Marking the 100th year of its founding, the Guild of St. Luke hosted a one day conference and "White Mass" for Catholic physicians, medical students, and others interested in bioethics and healthcare on Oct. 29.

"The Catholic Physician in the Secular World" conference featured daytime talks held at the Newton Marriott Hotel on chronic pain management, same-sex attraction and gender identity disorders, identifying and treating domestic violence, external threats to end of life issues, and the marks of a Catholic physician.

Two buses then took participants to the annual White Mass for medical professionals at the Cathedral of the Holy Cross celebrated by Cardinal Seán P. O'Malley.

During his homily at the Mass, the cardinal exhorted the medical workers to find time and space for God, to build their prayer lives. He also named specific strategies of the physician assisted suicide movement that seeks to legalize the practice in Massachusetts and asked for the doctors' help in opposing it.

After the Mass, they were brought back to the hotel for dinner and a keynote address by John Haas, the president of the National Catholic Bioethics Center (NCBC), who holds advanced degrees in moral theology and divinity.

In his address, titled "Medical Ethics Then and Now" John Haas stressed the importance of memory and the rapid deterioration of medical ethics in the last 40 years.

He called the profession of a physician a "remarkable lifetime task" and a sublime, noble and divine calling.

"To spend years and years of arduous education and sacrifice to gain skills to put at the service of the other-- this is what makes your profession so God-like," said Haas.

He looked to the Hippocratic Oath -- a pledge dating from before the time of Christ -- that physicians took before their gods and family. He quoted part of the original oath where doctors pledged, "I will give no one a deadly medicine even if asked, nor counsel any such thing." It also forbade aiding in abortion.

He said the first code of medical ethics of the American Medical Association (AMA) in 1847 that held the Hippocratic Oath in high regards and said that ethics "must rest on the basis of religion and morality." Haas said this ethos was basically still in place when the Guild of St. Luke was formed.

He then contrasted this history with secular medical thought in current times.

"What has changed is a deplorable, cultural shift away from professional conduct, shaped by virtue under divine providence to conduct increasingly shaped by relativism, self-interest, utilitarianism and, frankly, a militant practical atheism," said Haas.

Haas focused in on utilitarianism and legal positivism, philosophies he said are prevalent in contemporary secular medical thought and ethics.

"From the time of Hippocrates, the profession of medicine was seen as one of a virtuous life in sacrifice and service to others. Utilitarianism finds justifications for the sacrifice of others for ourselves," said Haas.

He pointed to the case of Oregon's physician assisted suicide law as an example of legal positivism, an approach that puts great emphasis on what is legal. He said that before the suicide measure was passed, it was opposed by the AMA. After it was legalized, the Oregon Medical Association supported it and resisted efforts by the Clinton administration to block its implementation.

"When we lose our memories, we lose our minds. Today we live in a world, not only legally sanctioning immorality but mandating it," Haas said referring to what he called the "unintelligible" mandate of Obama administration that health care plans to include contraception, some of which can act as abortifacients.

"We know one of our daughters terminated her pregnancy two weeks ago by giving birth to our twentieth grandchild," he said to laughter.

He called on the attendees to build up society's moral order by recalling Hippocrates, and "the great physician of souls, Jesus Christ."

He concluded by telling the physicians that the next time they dress a wound, set a broken bone, prescribe a medication or start an incision to "Say reverently and quietly to Our Lord, 'I do this in memory of you.'"

In attendance at the dinner and Haas' address was Dr. Joseph Murray, 93. Murray made history in 1954 when he led a team in the first successful organ transplant in the world in Boston. He later would receive the Nobel Prize.

"I think it's a great opportunity for us to hear these messages. We're all in the healing profession and it's a great privilege. Hearing at this wonderful level is double the pleasure," said Murray.