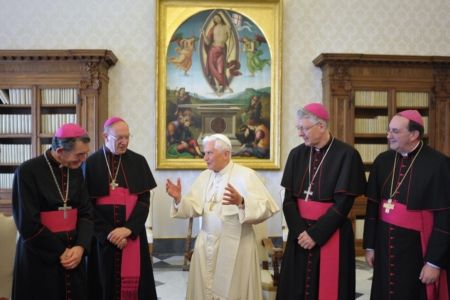 Earlier this week there was an "episcopal exodus" from New England as the leaders of the 11 New England dioceses -- serving the six New England states and comprising Region I of the U.S. Bishops' Conference (USCCB) departed for Rome. In addition to the 11 diocesan bishops, the auxiliary bishops of the region are also headed to the Eternal City for the first of 15 groups of U.S. bishops who will visit the pope and the offices of the Roman Curia during the coming months on the required "ad limina" visits to the Holy See.

The visit is called the "ad limina apostolorum" -- to the doorsteps of the apostles. The bishops visit and celebrate Mass at the burial places of Peter and Paul in the respective churches, the basilicas of St. Peter at the Vatican and St. Paul outside the Walls. They will also meet at some point during the visit with the Holy Father.

Pope Benedict has adopted a new format meeting with groups of 8-10 bishops at a time and having a kind of roundtable with them. Most accounts of bishops who have so far been on visits say that it is a very useful way for the Holy Father to meet the bishops; that he is, as is often reported, a very good listener and able to synthesize the meeting and, if need be, pose questions or make suggestions to the bishops.

The greatest amount of time is taken up with the spiritual side of the visit: celebration of Mass, prayer, and visiting the various offices of the Roman Curia, who daily assist the pope in the government of the universal Church. Among those offices that the New England Bishops are slated to visit between Nov. 3-9 are those that deal with bishops, clergy, education, liturgy or Divine Worship, and consecrated life.

The newest agency created by Pope Benedict himself, the Council for the Promotion of the New Evangelization, is also on the list. This council and its mandate are especially close to the pope's own agenda; and as he gives a series of addresses to the bishops, there is wide speculation that this will be the unifying theme woven through the five or so talks the pope will deliver to the various groups of American bishops over the next several months.

Prior to their arrival in Rome the diocesan bishops were asked for a report on the condition of their respective dioceses. These reports are usually due to Rome about six months before the visit itself. They are called "quinquennial" reports because traditionally they had to be submitted every five years. This time frame allows the report to be separated into sections and distributed to the offices of the curia that would be responsible for its particular activities. For example, the report on Catholic Education with its statistics and narrative section would be given to the Congregation for Catholic Education; the bishops will meet there on Nov. 7.

This is not a case of the central office checking up on the local branches. Rather as the reports are compiled, they can be seen as a kind of self evaluation of the diocesan bishop's ministry and also of the diocese itself.

The bishop likely involves many of his staff and diocesan officials in the compilation of the report, so it can also help the various offices see how effectively they are performing their tasks and assisting the bishop.

The outline for the report asks that the narrative summaries be brief. As with all such guidelines that word can apparently mean different things to different folks. One bishop, from another part of the country, admitted that his report was over 300 pages long -- his diocese is about half the size of one of the regions of our archdiocese.

It is expected that Cardinal O'Malley will post updates on his blog, www.cardinalseansblog.org.