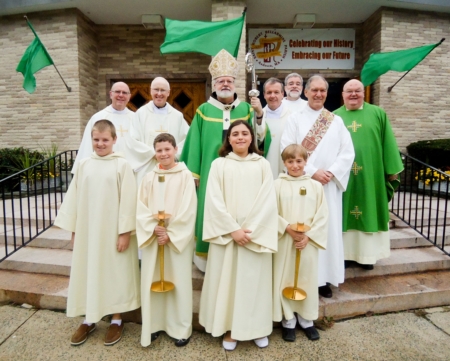 'On Sunday (10/2), I was at St. Robert Bellarmine Parish in Andover to celebrate Mass for their 50th anniversary.' Pilot photo/CardinalSeansBlog.org

On Thursday (9/29), for the feast of St. Michael the Archangel, I was at Bridgewater State Hospital, which is part of the corrections system in the Commonwealth of Massachusetts. We were accompanied by Deacon Jim Greer, who oversees the hospital and prison ministry, and a chaplain there, Peg Newman.

We had the Mass in the auditorium and were able to greet several of the inmates. Then we visited those that were confined to a section of the hospital, because they were not in good enough health to attend.

That evening (9/29), I went to the Harvard Club in Boston to attend an event marking the release of a new book by local businessman and former Swiss Guard, Andreas Widmer, called "The Pope and the CEO." It was a very pleasant time and during the evening they had a QandA with Andreas about his book. One of the more amusing things we learned was that the original cover showed Andreas being much taller than the Holy Father -- so they shortened him in the photo! I told him that Giotto had learned how to do that, he sized everyone in his paintings according to how important they were! The interesting thing about Andreas' book is that so often, particularly today, we identify lay ministry and people's participation in the Church with their liturgical functions such as lectors, ushers or greeters. Of course, the liturgy is the high point of our life; it's there where we find our strength and live our Christian vocations. But the vocation of the laity is really to carry the ideals of the Gospel to the workplace, to the family, to society and this is what Andreas Widmer is doing. Having lived in the shadow of the pope and observed the Holy Father and absorbed his spirit, he has translated that experience into the life of a Catholic businessman, a Catholic professional. This is a great service to the Church.

On Sunday (10/2), I was at St. Robert Bellarmine Parish in Andover to celebrate Mass for their 50th anniversary. Father Arthur Driscoll, the former pastor, joined us along with a number of priests who had been connected with the parish. They had an extraordinarily wonderful choir, both a children's choir and an adult choir. I was very impressed by the fact that there was great congregational singing. Often times in parishes with a good choir, people just listen! Another thing that the parish does is they have nametags for the people, which I thought was a very interesting idea -- it helps to build community and lets people get to know each other. Father Richard Conway is doing an extraordinary job and there's a wonderful parish spirit. The liturgy was beautifully executed, and people had many different activities to mark the 50th anniversary of their parish life.

On Wednesday, I attended the inauguration of the new president of Regis College, Dr. Antoinette "Toni" Hays. Dr. Hays is replacing Dr. Mary Jane England, who stepped down after a long tenure at Regis. She has been on the faculty there since 1985 and most recently was the first academic dean of their new school of nursing, science, and health professions. She obviously has the advantage of knowing the school well and will be able hit the ground running, as they say.

We are very grateful to the Sisters of St. Joseph who founded and sponsor the school. Like all of our Catholic colleges, Regis is a gift to the community.