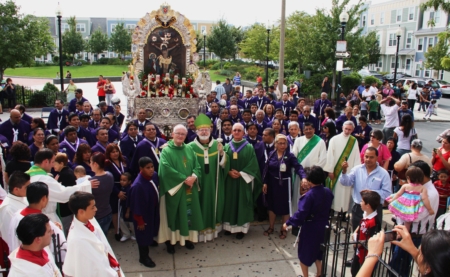 'On Sunday, I visited Most Holy Redeemer Parish in East Boston. The pastor Father Tom Domurat invited me to celebrate the Spanish Mass there.' Pilot photo/CardinalSeansBlog.org

On Friday (9/23), I met with the Italian Consul and Father Antonio Nardoianni, the Franciscan pastor of St. Leonard Parish in the North End. The Italian community is planning celebrations locally, as Italians are throughout the world, for the 150th anniversary of the state of Italy. And they came to speak to me about it and invite me to be part of the celebration that's going to be held on Oct. 9 in St. Leonard's.

As each of the seminaries begins the year with a Mass invoking the aid of the Holy Spirit, that evening (9/23) I went to celebrate the Mass of the Holy Spirit at Redemptoris Mater Seminary. It was also the feast of St. Padre Pio. I was happy to greet one of the new seminarians, Nick Thompson, originally from Minnesota. Another three are on their way after they were invited to come to our seminary a couple of weeks ago, at an international gathering organized by the Neocatechumenal Way in Porto San Giorgio, Italy. These young men responded to God's call to the priesthood as they were participating in the life of their local Neocatechumenal communities. Their call is both diocesan and missionary so they are willing to go to be formed, and eventually incardinate themselves in, any diocese with a Redemptoris Mater Seminary like ours here in Boston. I have participated several times in those gatherings, but this year I was unable to attend so I asked our Vicar for the Clergy and Parish Life, Father Tom Foley, to represent me there.

On Saturday (9/24), we had our first meeting of the year with the Massachusetts Catholic Conference, which included the four bishops of the Massachusetts along with representatives from the various dioceses. The new staff members of the MCC were there: executive director, James Driscoll, and associate director for policy and research Peter McNulty. Of course, among the very important issues that we discussed was the initiative to legalize physician assisted suicide. Plans were made to initiate a response on the part of the Church, and a committee is being set up with representatives from the four dioceses. Jim Driscoll also announced that the MCC is working on launching a newly redesigned web site, which will be a great aid in our efforts at outreach and education on this and other issues.

Visit to Most Holy Redeemer Parish

On Sunday (9/25), I visited Most Holy Redeemer Parish in East Boston. The pastor Father Tom Domurat invited me to celebrate the Spanish Mass there. This parish has one of the largest Mass attendances in the diocese, and, not surprisingly, the church was packed. We were accompanied by many members of the Hermandad del Senor de Los Milagros in their purple outfits. They represent the Peruvian community, which was beginning their week long celebrations in of honor the Lord of Miracles, which is a very famous image of the crucifixion in Lima.

...Then also at the Mass, I gave a special blessing to those involved in the St. Vincent de Paul Society who are very active in the parish. Father Al Keenan, who is a retired priest in residence there, also accompanied us. There are some great things going on at Sacred Heart, which is a very active parish. This was Bishop Robert Hennessey's former parish and, in fact, he is coming back next week for the feast of El Senor de Los Milagros itself.