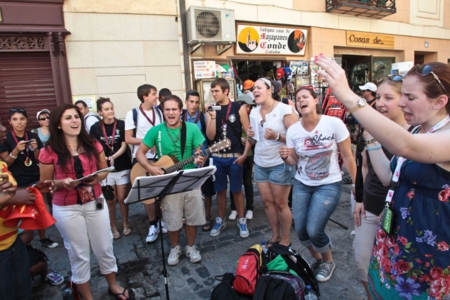 Students from Boston University take part in an impromptu sing-a-long outside the Cathedral of Toledo with other pilgrims from around the world, Aug. 15. Pilot photo/George Martell, The Pilot Media Group

After a challenging day under the hot sun of Spain, my cousin and I were feeling like tired pilgrims! But we quickly perked up when we heard the beat of the Congo drums coming from a plaza off of Gran Via. We couldn't stop ourselves from dancing and joining the drummers. They were from Italy, and as more people started to gather around, the drummers began teaching us all dances and songs from their country. Within the course of a few minutes I was part of a vibrant circle of people from all nations, which had formed around the music! To my right was a girl from the UK who taught me an African dance, and to my left was a girl from Spain. A French girl jumped in the circle at one point and taught us all a dance from France; not once did we stop moving! To conclude our spontaneous dance party, the hundred or so young adults joined hands, raised them together and prayed aloud the "Our Father" in our native languages. There was immense beauty in that moment. It was then when I realized that there are so many universal ways of communicating -- music, dancing, love, laughter, prayer. It was this moment when I realized the same beauty exists within the Catholic Church being one, holy, and apostolic, binding God's children from all over the earth into one body. What a great love and mystery it was to see millions of young people joined together for the sole purpose of praising God with one another and sharing their journey of faith. World Youth Day opened my eyes and heart to much beauty -- in the people, the cathedrals, the city of Madrid, and mostly in the beautiful relationship God has with each of us.