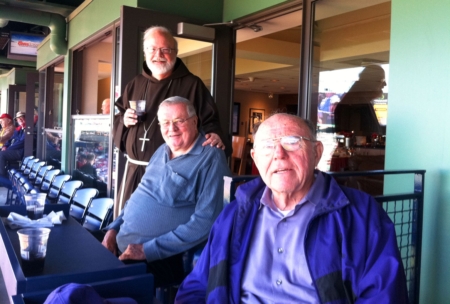 'On Monday (9/19), I attended a Red Sox game with our senior priests from Regina Cleri.' Pilot photo/CardinalSeansBlog.org

Then, in the afternoon (9/18), I went to visit the Daughters of St. Paul in Jamaica Plain where they had a tea event. This is the event's second year and they give out an award called the Cordero Award. It is named after Mother Paula Cordero, who brought the order to the United States with some of their early sisters. I was very pleased to attend this event, which raises money to support the Daughters' formation program. This year, the Cordero Award was presented to Father Bob Reed, the president of the CatholicTV Network. Father Reed gave a very beautiful talk on his ministry in the media.

That evening, I went to the home of Consuelo Isaacson for the annual gathering she hosts to raise funds for Caritas Cubana, which supports the Church's social ministries in Cuba. Particularly, it supports daycare centers and centers for the elderly, food programs, and provides medical supplies. Caritas Cubana is an extraordinary organization that has achieved so much, despite the fact that the government in Cuba has not allowed the Church to really participate in the social ministries. Yet, Caritas Cubana has been able to support the initiatives that are taking place in the parishes.

On Monday (9/19), I attended a Red Sox game with our senior priests from Regina Cleri. It was a beautiful day; we had a lovely box at Fenway Park that was generously provided to us by Hill-Holiday. John Kaneb, who is one of the owners, was with us. It was a perfect day, the only fly in the ointment was that the Orioles won the game! I must say it was one of the few times I've ever gone to a Red Sox game where they didn't win. But they won that night, so apparently we went to the wrong game. I was pleased to see Father Phillip King, who is well known among Boston priests and who recently published a book on Biblical archeology. He will soon be moving into Regina Cleri, along with Father Vincent Dailey, the uncle of Father Vin Dailey at St. Gregory's in Dorchester. Despite the Red Sox's loss, it was a great opportunity to be with our senior priests and I think they all enjoyed it very much.

Later that day, I had Mass at the Pastoral Center for the Catholic Charities board, followed by their annual meeting. Catholic Charities, of course, is doing extraordinary work in these difficult times. During the meeting we heard that Charities has been able to stabilize their financial situation with the help of so many generous donors. We also received a report on the important work being done at the afterschool programs of the Laboure Child Care Center in South Boston.

Visit to St. Agatha in Milton

On Wednesday morning (9/21), I visited St. Agatha Parish in Milton to celebrate the 70th anniversary of their school. They have 604 students in the school, which was originally staffed by the Sisters of St. Joseph. Father Peter Casey is the pastor and they have an outstanding program there. At the Mass, the children's choir sang and the children participated with such fervor and devotion that really makes you more convinced than ever of the value of our Catholic schools in evangelizing and introducing our children to the faith.