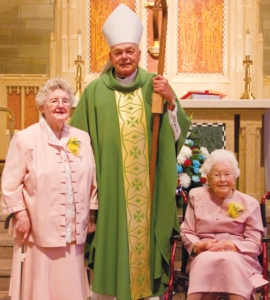 WEST ROXBURY -- Religious Sisters of the Archdiocese of Boston were honored at a Jubilarian Mass and dinner held at St. Theresa of Avila Parish on Sept. 11.

Auxiliary Bishop John A. Dooher presided over the Mass that marked the Jubilee year of entrance and profession for 150 women religious in the archdiocese who were marking anniversaries of 25, 50, 60, 65, 70, and 75 years. Combined, the women have given more than 5,100 years of service to the Church. (See list of jubilarians at the end of this story.)

"It is a privilege and an honor for all of us here together, to join with you in offering praise and thanksgiving for the way that the call is answered in each of your lives," said Bishop Dooher in his homily. "In the so many different ways in which your life ministry, at different phases, have somehow all been part of the mission of Christ to redeem the world."

Bishop Dooher noted the Mass readings' message of forgiveness in the context of the commemoration of 9/11. He also remembered all those who had lost loved ones that day.

"This date, these two events where one is joyful and one is very somber, ten years later and leads so many questions, they're part of a great mystery. And it is the great mystery that we celebrate as the Church that in every day, in so many ways, we are all called to build the kingdom of God," said Bishop Dooher.

"We thank God for all that you have done, and do, and continue to do by your ministry, by your life, by your prayer," he concluded.

After Bishop Dooher's homily, the Jubiliarians renewed their vows of poverty, chastity, and obedience.

Before the conclusion of the Mass, Sister Marian Batho, the delegate for religious for the archdiocese, offered some reflections about the unique vocation of a religious sister.

She said that courageous men and women founded religious communities, responding to a pastoral need of the Church, and they inspired many to follow them.

"Throughout the years sisters have trusted in the providence of God and given themselves totally to the service of others. Sisters are involved in a variety of ministries and are energized by the questions 'What should we do next?' and 'Where is the greatest need?'" said Sister Batho.

"Your ministry, presence, and prayer are sources of encouragement and healing. And so today we say thank you for the many ways that you have been the faces of God's mercy and compassion," she continued.

She also recalled the contemplative Sisters -- whose rule of life prevented them from attending the public Mass -- and Sisters unable to attend due to sickness who were also marking a Jubilee.

Following the Mass, the Jubiliarians, their family and friends, attended a reception and a dinner at the parish gymnasium.

Sister Declan Sullivan, 93, was the oldest jubliarian in attendance, celebrating 75 years of service. A member of the Sisters of St. Joseph, she taught at the now closed Boston School for the Deaf for 48 years and became a certified audiologist.

Sister Declan said she thought the Mass had been one of the most beautiful ceremonies that she had attended.

"Everything and everyone, (the) organization was suburb. Every bit, from the bishop down, it was beautiful," said Sister Sullivan.

Sister Sean Mayer, 45, the youngest of the Jubliarians, was asked to consider religious life by a religious sister when she was a teenager in Miami.

A Daughter of St. Paul, Sister Sean entered the order when she was 14 and professed around the age of 20.

"My life is meant to be a life of Christ, becoming the message that I proclaim through my apostolate," said Sister Mayer who is involved with book editing and the choir with the Daughters.

Sister Sean said religious life is "like a jewel with a lot of different facets, but it works together as a whole."

SISTERS DISCIPLES OF THE DIVINE MASTER

SISTERS OF CHARITY OF OTTAWA

SISTERS OF ST. FRANCIS OF ASSISI

CISTERCIANS OF THE STRICT OBSERVANCE

SISTER OF MERCY OF THE AMERICAS

CARMELITE SISTERS OF THE AGED AND INFIRM

CISTERCIANS OF THE STRICT OBSERVANCE

SISTERS DISCIPLES OF THE DIVINE MASTER

SISTERS OF THE HOLY CHILD JESUS

MISSIONARY SISTERS OF THE BLESSED SACRAMENT AND MARY