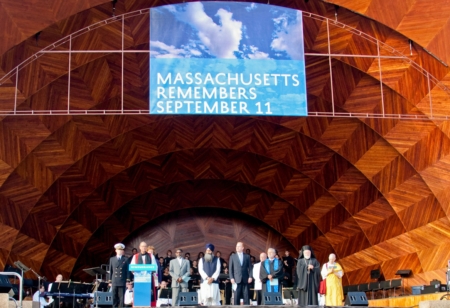 BOSTON -- On the 10th anniversary of the tragic events of Sept. 11, 2001, representatives of Massachusetts's religious communities came together in Boston to reflect on the work necessary to bridge the gaps and treat the wounds opened on that day.

According to organizers, an estimated 7,000 people gathered in and around the Hatch Shell on the Charles River Esplanade for the interfaith Massachusetts Remembers Memorial Concert and Ceremony.

Laura E. Everett, associate director of The Mass Council of Churches, said, "The fact that Sept. 11 fell on a Sunday gave Christian leaders the unique opportunity to address this in their congregations."

"The prayer used during the event today was written by Christian, Jewish and Muslim leadership, and we made that available for the public to use. So we know that in houses of worship and town commons across Massachusetts, people were praying together," she said.

The gathering featured music by The Boston Pops, prayer and reflections by clergy from a wide spectrum of local religious communities as well as remarks by public officials including Gov. Deval Patrick and Rep. Ed Markey.

"This was one of several memorial events which we needed in the city to remember, to honor, to grieve, to pray together," Father David C. Michael, associate director of the office for Ecumenical and Interreligious Affairs for the Archdiocese of Boston, said in an interview after the event. "It was extremely important that the religious communities were seen together before the world."

Father Michael began the ceremony's opening prayer as seven other religious leaders from around the Boston Metro-area joined him in praying for healing, hope and peace in the face of the ongoing suffering of people all over the world in the long aftermath of the attacks.

"We gather in God's presence, and in one another's presence on this 10th anniversary of 9/11," he said.

Other religious offered prayers, in turn, to complete the opening blessing.

Imam Talal Y. Eid of the Islamic Institute of Boston and the Muslim chaplain of Brandeis University prayed, "We gather to remember our devastation on that day," said Imam Eid. "To remember all those who were killed, victims of hatred and violence, those who sacrificed their lives or health to rescue others, and all those who have mourned, and continue to mourn, that loss."

Former television news anchor Rev. Liz Walker served as master of ceremonies. In her opening, she said, "Without warning we became mourners."

But beyond mourning and consolation, the day's speakers also embraced the need for healing and moving on by building bridges between people and cultures.

Susan Retik, co-founder and president of Beyond the 11th, spoke about her work providing care and solace to Afghan women effected by the cycle of violence that led to, and created a wake after, the terrorist attacks.

Retik spoke despite having suffered a concussion and broken clavicle during the 270 mile memorial bicycle ride from Ground Zero that concluded at the Hatch Shell.

Retik lost her husband David in the attacks, and she recalled her feelings of grief and hopelessness on that day. Describing her experience at Ground Zero before the ride, she also recalled her resolve and commitment to move beyond and through the tragedy.

"I couldn't help but think. 'Who supports these women when their husbands died? Who will help lift them out of hopelessness and despair?' I knew I could help just one," she said of her time working with widows abroad.

"When I had the opportunity to go to Afghanistan and meet men and women who just like me had been widowed at a young age, who were trying to raise families the best they could, I realized that the common thread of motherhood makes us far more alike than different," she said.

"I knew within the first moments of widowhood," she said. "I would not get stuck in a place of anger and hate."

Following Retik, Stephanie Holland spoke about her experience after her mother, Cora Holland, died in the attacks. On the stage, she represented the 209 victims of the attacks with ties to Massachusetts.

In addition to the celebration of diversity, some noted the patriotic fervor created by the conflict which began in 2001. One speaker used her faith and religious background to combine the two. U.S. Army Reservist Lt. Col. Shareda Hosein, Cultural Advisor at Special Operations Command, attended the second day of her seminary studies on Sept. 11, 2001.

She spoke of religious influence on the attacks and the terrorist attempts to create what she called "a cosmic war on the United States in the name of Islam."

Lieutenant Mustafa Thompson and Lieutenant Colonel Dan Nash read an untitled poem, before Nash recounted his flight in an F-15 over the fallen towers on the day of the attack.

"We did everything we could to get there as fast as we could, but still could do nothing to help," he said. There was a horrible loss of life on that day but it could have been far worse if not for the heroic actions of the firemen, police, and civilians who evacuated so many people."

Mary E. Heffernan, secretary of the Executive Office of Public Safety and Security, introduced representatives of state and local police and EMS first responders -- firefighters were at a dedicated memorial at the state house.

In an interview afterward, Father Michael noted his perception of a vilification of religion in media coverage of the Sept. 11 anniversary.

"The issue is not religion as such, but it is an issue that people make choices to do good or to do evil," he said. "That's the problem. The issue is the free choice to do good or do evil, in the name of God or of some other cause."

He then added his thoughts on the religious community and their role in helping move beyond the tragedy, even to the point of bridging the gap between people of all faiths and the secular world, presenting the gathering on Sunday as an example.

"We came together as one people, it's important for us to do that before the world."