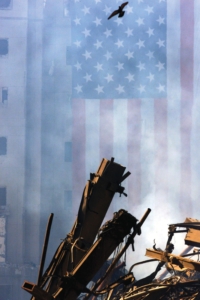 A giant U.S. flag hanging from the World Financial Center looms over the tangled wreckage of the World Trade Center Sept. 19, 2001 in New York. CNS file photo from Reuters

Cardinal Seán P. O'Malley shared with The Pilot an excerpt of his scheduled blog entry this week in which he marks the tenth anniversary of the Sept. 11 terrorist attacks.

As we prepare to mark the 10th anniversary of the horrific events of Sept. 11, 2001, like many of you, I can't help but recall how I first received the news.

That day I was in Washington D.C. for an administrative meeting at the U.S. Conference of Catholic Bishops. Our meeting was interrupted with the announcement that a plane had hit one of the World Trade Center Towers in New York, but we had no further information. My first thought was that there must have been an accident and recalled how some years before a small plane had collided with the Empire State Building. That small plane had, in fact, hit the office of Cardinal Patrick O'Boyle who was then serving as the director of the Catholic Near East Welfare Association. I remembered him describing that scene to me, so I immediately had an image of a terrible accident. We assumed there would be some injuries and certainly loss of life.

We had no idea.

A few minutes later we were interrupted again with the news of the second attack. At that point, we cancelled the meeting and it was announced that there would be a Mass for the victims at the Shrine of the Immaculate Conception, which was just across the street. When we arrived there, we found the shrine already crowded with a huge gathering of people.

One of the most impressive things about Sept. 11 was the deep religious response if provoked in people -- a reaction of solidarity, of wanting to be together. People wanted to pray. Sometime later, I spoke to people from Ireland who told me that, on that day, even there the churches were packed and special Masses quickly arranged. Even thousands of miles from the attacks, there was that strong sense of community, solidarity, and need to share sorrow that brought people together in a very profound way.

Of course a great concern for the bishops was to return to their dioceses, but in Washington we were completely cut off. By then we had learned of the attack on the Pentagon and those who gave their lives in Pennsylvania and there was the belief that the terrorists would try to destroy the White House. There were no flights, trains or buses to get back to Fall River, where I was bishop at the time.

The president of Catholic University was good enough to put his car at our disposal so that the three New England bishops could get back to our dioceses that evening. The drive was eerie, with practically no one on the highway and all the toll booths empty. Newark and La Guardia airports were closed and had snow plows blocking the entrances.

While on the way back to Massachusetts, I received a call from my brother, who was in Boston because he was a pilot for United Airlines. He told me he had been scheduled to pilot the next flight to Los Angeles. Had he been assigned one flight earlier, he would have been the pilot on one of the planes that struck the Twin Towers. However one who was on that plane was David Angell, the brother of Vermont Bishop Kenneth Angell, who perished on that same flight. Bishop Angell had actually driven David and his wife to the airport that morning. He dropped them off at Logan Airport and, on his way home, heard about the crash on the radio. It was amazing how many people were affected by these events. Everywhere you went, people had a story about someone that they knew on a plane, in the Twin Towers or at the Pentagon.

The entire nation was also moved by the sacrifices of the public safety officials who gave their lives courageously fulfilling their duty. Over 300 fine men and women perished, including Father Mychal Judge, a Franciscan in New York who was the fire chaplain and who died giving the last rites to victims at the World Trade Center.

The events of Sept. 11 demonstrated the fragility of human life and, as often happens in these cataclysmic events, you saw the very worst and the very best of humanity. The worst, certainly, were those who plotted for months, and perhaps years, to perpetrate this crime that killed thousands of innocent people. At the same time, you saw the courage of the firefighters, law enforcement officers, and even average citizens, such as the passengers who fought back on United Airlines Flight 93, forcing the plane down before it reached its intended target.

Unfortunately, the dehumanizing practice of terrorism, in many ways fueled by our communications culture, has become part of our modern world. There was a time when warfare was seen as something conducted between combatants. Civilians and other populations were, for the most part, respected and protected. Now, however, terrorists target the most innocent and vulnerable to cause the greatest amount of shock and horror for the psychological effect that they can instill on the public.

We had not had an act of war on the continental United States since the civil war -- of course we cannot forget Pearl Harbor -- so it was a very shocking experience for Americans. Yet, the horrors of modern warfare are an experience that people in Europe lived during World War II and, in other parts of the world, continue to experience.

However, as we commemorate these events 10 years later, our attitude is one of prayer and gratitude for the sacrifices of so many who went in to rescue victims of these terrible terrorist attacks. We pray for the victims, the families and the survivors who may still be traumatized and whose health has been compromised by the effects of the attacks.

Terrorism often comes about because of injustices in society. One of the ways that we can discourage terrorism is to be proactive in dealing with the injustices in the world. As Catholics, we believe we have a mission to build a civilization of love, work for greater solidarity and cooperation among nations, promote the rights and dignity of every human person, and to advance economic justice and religious freedom in the world.