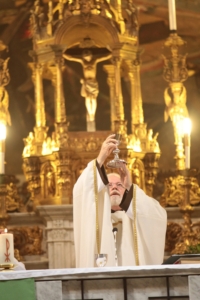 'I was invited to attend, but we were having a Mass for the Boston crowd at the largest church in Madrid, which is San Francisco el Grande.' George Martell, Pilot New Media

As you may know, this week I returned from attending the World Youth Day encounter with the Holy Father in Madrid, Spain.

Saturday (8/13) the Holy Father had Mass in the Cathedral for seminarians. ... I was invited to attend, but we were having a Mass for the Boston crowd at the largest church in Madrid, which is San Francisco el Grande. I had never been in that church and Father Matt Williams came up with the idea. It's a stunning church, it really is monumental! I don't know how many were there, but it seemed like a couple thousand people -- quite a big crowd!

Saturday night (8/13) was the vigil with the Holy Father at Cuatro Vientos airbase. Of course, one of the most memorable aspects of the vigil for anyone who was there was the torrential rain that hit not long after it started. I suppose it shows that I live in New England, but I think I might have been the only bishop who brought an umbrella. I had heard on the news that there might be rain, so I took it with me. And when the rain came, they brought out these big white umbrellas for the bishops to use, and they quickly turned inside out. Meanwhile, my little black collapsible umbrella was probably the only one that was really functioning! Unfortunately, the Holy Father's homily, in which he was going to respond to questions that had been submitted by a number of young people, was destroyed by the rain. It put me in mind of a Mass I once had at the National Shrine of the Divine Mercy in Stockbridge. We often had inclement weather on the feast day and we thought that we had solved the problem by putting my homily in plastic page protectors. But on that day it was raining so hard, and there was so much rain on my glasses, I couldn't read it anyway! It was still a very moving service, and after the winds and rains died down, which was rather quickly, we had the Holy Hour and the consecration to the Sacred Heart. Even more impressive, though, was the reverence of the pilgrims. The crowd stretched as far as you could see and yet, during adoration there was great quiet.

Typically on the Monday (8/15) after the World Youth Day Closing Mass, the initiators of the Neocatechumenal Way hold a gathering for the members of the Way from around the world and also a number of bishops and cardinals. This gathering, like many of the World Youth Day events was in the Plaza de Cibeles. I was asked to attend, and we had group of about 130 pilgrims from Boston there. As he usually does, Kiko Arguello, one of the initiators, gave a period of catechesis, after which he invited young men and women to offer themselves to discern a vocation to the priesthood or consecrated life.

Those who feel called are asked to stand and then come up to the stage to receive a blessing from one of the bishops. Later, when they return home, they will receive additional formation and spiritual guidance to continue their discernment. As always, it was quite impressive. Of the about 200,000 young people there, I understand about 8,500 came forward -- about 5,000 young men and more than 3,000 young women. I was very pleased to give many of them my blessing. It was very fitting end to World Youth Day.