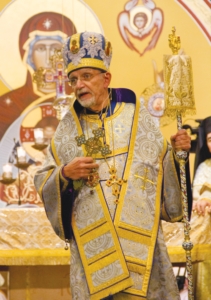 Bishop Nicholas J. Samra, the new Eparch of Newton, gives some closing remarks at his Enthronement Liturgy at the Melkite Cathedral of the Annunciation in West Roxbury Aug. 23. Pilot photo/ Justin Bell

WEST ROXBURY -- A New Jersey native was installed as the first American born eparchial bishop in the United States for the Greek Melkite Catholic Church on Aug. 23.

Bishop Nicholas J. Samra, 67, was installed as the Eparch of Newton during an elaborate service, called an Enthronement Liturgy, at the Melkite Cathedral of the Annunciation in West Roxbury.

The Melkite Church is an Eastern rite of the Catholic Church.

Bishop Samra was first ordained as an auxiliary bishop of Newton in 1989 and went into retirement in 2005, until his appointment as eparch this June.

After an entrance procession that included many bishops, priests, and deacons, Exarch Joseph Haggar read a letter from Pope Benedict XVI, called the Papal Bull of Designation, which declared the appointment of Bishop Samra.

"May the lights and joy of the Holy Spirit and under the protection of the most holy Mother of God, be always with you and with your ecclesial community which is so very dear to us," stated Pope Benedict in his letter.

The previous Eparch of Newton, Metropolitan Archbishop Cyrille Bustros of Beirut and Jbeil, thanked Bishop Samra for his work as a priest and auxiliary bishop. He also thanked the clergy, religious, and laity of the Newton Eparchy and pledged his prayers for them, while asking for their prayers in turn.

Archbishop Bustros then read a letter from Patriarch Gregory III, the head of the Melkite Church who resides in Damascus, Syria.

The patriarch wished Bishop Samra "a successful pastoral ministry founded on strength and faith in the hearts of the believers in your vast country."

"We pray that he will continue to find those we call the hidden Melkites, whom we do not know, so we can serve them the holy mysteries and that they will not feel lost in their Church, but have one Church to belong to," stated Patriarch Gregory.

Following the letter, Bishop Samra approached Archbishop Bustros to receive the shepherd's staff, escorted by various clergy. Prayers were then invoked by a deacon and the choir that the new bishop may be preserved by God for many years.

In the vesting ceremony of the liturgy, Bishop Samra received and blessed seven distinct vestments, a pectoral cross, and medallion called an engolpion. He also blessed his crown--similar to a bishop's miter in the Roman rite -- and his staff.

Following these rituals, the Divine and Holy Liturgy of John Chrysostom began. After a Gospel reading, Bishop Samra addressed the congregation.

He noted that the date was the closing of the eastern feast of the Dormition of the Mother of God, marking the death or "falling asleep" of Mary. Bishop Samra called it probably the most important day of commemoration for Mary. In the Roman rite, the Dormition is celebrated as the Assumption, when Mary was taken into heaven.

In his remarks, he repeatedly pointed to Mary as an example for Christians to follow in giving flesh to Jesus. Bishop Samra cited Sacred Scripture and the Eucharist as ways for the faithful to bring Christ to others.

"Not only should we hear it, but we should digest it into our hearts and then when we leave the church, we become the word of God to the community outside," said Bishop Samra.

He noted that when the bread and wine are brought to the altar prior to the consecration, these items also represent the gifts of the people assembled.

"We say thank you to God for life and for all the aspects of life that he continues to give us -- each day of our lives -- and we take those gifts and place them on the altar, you are now there," said the bishop.

He said that God in turn gives the gifts back to the people transformed into the body and blood of Christ.

"Now Christ flows through you, but it's not over. That's nice, we're transformed, we become one body because we're one bread and one cup. It unites us together, but something more important happens, we leave the church...Now that we are transformed we go back into the world in which we live to transform it," said Bishop Samra.

Following his homily, the liturgy proceeded into the eucharistic consecration and distribution of communion. The overall ceremony incorporated English, Aramaic, and Greek words and chants.

Toward the end of the liturgy, Bishop Samra expressed thanks and signaled the dismissal of the people with a blessing gesture with two long candles, called a dikerion and trikerion.

Cathy Moody, whose grandfather came to Massachusetts from Lebanon and was one of the founding members of the cathedral, described the event as "incredible" and said she was "excited for the future of the Melkites in America."

Eric Alaimo, 27, a religion teacher from Central Catholic High School in Lawrence, is a Latin Catholic who attends the Latin Rite Mass on Saturday evening and the Melkite liturgy on Sunday morning.

"To quote Blessed John Paul II, I like to breathe with both lungs," said Alaimo, referring to the late pope's description of the Churches of the East and West as the two lungs through which the universal Church breathes.

Alaimo said the event had an extra special significance with Bishop Nicholas being American born.

"I'm curious to see where that's going to lead the Melkite Church in America," said Alaimo.