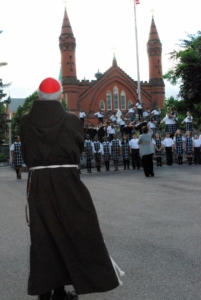 'I am sure all the teachers are doing great things, but that evening we had the chance to witness the extraordinary work Mary Swanton is doing first hand as the choir and musical director.' Pilot photo/CardinalSeansBlog.org

I am sure all the teachers are doing great things, but that evening we had the chance to witness the extraordinary work Mary Swanton is doing first hand as the choir and musical director. As part of the program one group of children sang and another had their violins. This is just one indication of the great progress they have made in introducing many cultural aspects to the education of Pope John Paul II Academy. Carolyn and Peter Lynch have raised over a 100 million dollars for scholarships for inner-city school children and their commitment to Catholic education has been of an extraordinary benefit to the Catholics of the archdiocese. We're very grateful to them and very pleased that they were given the Founders Award.

Then in the afternoon (6/4) there was a confirmation ceremony in the Extraordinary Form at the cathedral. They were parishioners from the cathedral, as well as from St. Adelaide's. In all, there were about 20 confirmed.

Also on Saturday I visited Sancta Maria House, a shelter for women very close by the cathedral, which has been there almost 40 years. It was Mary McHale and other members of the Legion of Mary who founded the house. It's supported entirely by private donations, they get no public funds. Each year, they serve about 3,000 homeless women. They are also very active in working to get people off the streets and helping them to find jobs.

...Many of the women who have gone through the program of Sancta Maria have returned as volunteers and are very supportive of the program there.

It's a very beautiful work inspired by the Legion of Mary. The Legion of Mary is a very important lay movement founded in Ireland by Frank Duff. When I was growing up it had big influence on my own life and I was very happy to visit Sancta Maria House and bless the house and the garden and to pray with them the Legion of Mary prayers.

Finally, in the afternoon (6/8), I met with a group of doctors, researchers and parish representatives working on a new program called CRUZA to promote cancer screening and awareness in the Latino community through the parishes. CRUZA is a partnership of the Gaston Institute of UMass Boston and the Dana Farber Cancer Center.

The idea behind CRUZA is to bring education programs to people though the churches, which for many immigrants, is the center of community life. It was wonderful to meet the representatives of this organization and hear about their plans and we look forward to working with them.