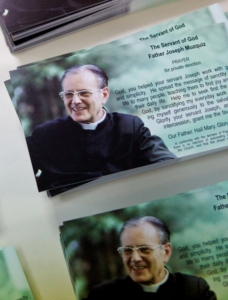 Holy cards with the image of Opus Dei priest Father Joseph Muzquiz are displayed at the June 2 ceremony at the Archdiocese of Boston's Pastoral Center to open his cause of canonization. Pilot photo/Gregory L. Tracy

BRAINTREE -- Several local members of Opus Dei are pleased the Archdiocese of Boston has opened the cause for canonization of one of their cherished priests.

About 150 people, many of whom are local members of Opus Dei, attended the formal opening of an inquiry into the cause of canonization of Father Joseph Muzquiz, a priest of Opus Dei who established the organization in the United States and worked for many years in the greater Boston area, June 2 at the archdiocese's Pastoral Center.

"All Christians are called to be saints and we are deeply grateful that the Archdiocese of Boston is undertaking this effort to see whether Father Joseph Muzquiz indeed truly lived a holy life," said Opus Dei spokesman Brian Finnerty.

Father Muzquiz was born in Spain in 1912. He joined the Nationalist army during the Spanish Civil War after his city was taken over by Nationalist forces. In 1941, he was admitted to Opus Dei.

He was ordained to the priesthood on June 25, 1944. Upon coming to the United States in 1949, he helped establish Opus Dei centers in Chicago and Washington, D.C. He also laid the foundations for Opus Dei's work in Canada, Japan and Venezuela. During the 1960s and 1970s he worked in Europe and pressed for the canonization of the organization's founder, Father Josemaria Escriva.

He returned to the U.S. in 1981, settling at Arnold Hall Conference Center, an Opus Dei apostolate in Pembroke. On June 20, 1983 he suffered a heart attack while teaching a class there, and died the following day at Jordan Hospital in Plymouth. His funeral was at the former St. Aidan's Church in Brookline and he is buried at St. Joseph's Cemetery in West Roxbury.

The June 2 event marked the beginning of the process that could lead to the canonization of Father Muzquiz. Inquiry officials will hear testimony from people who knew Father Joseph and can testify to the holiness of his life. As the cause continues, inquiry officials will accept evidence of alleged miracles attributable to Father Muzquiz's intercession. Following satisfactory completion of this process, the case goes to the Vatican's Congregation of the Saints for their investigation.

Archdiocese of Boston Assistant Vicar for Administration Father Bryan Parrish began the meeting with a prayer. Father Parrish represented Cardinal Seán P. O'Malley at the event. The cardinal was traveling and was unable to attend.

Following the opening prayer, Father David Cavanagh, an Opus Dei priest who is the postulator for Father Muzquiz's cause, gave some remarks.

Father Cavanagh praised Father Muzquiz, saying he "may be one of those persons who has persevered to the end living a life of heroic virtue on the path to sanctity."

"Is the Servant of God Joseph Muzquiz one of those persons who has lived the virtues to a heroic degree?" Father Cavanagh also said. "Today marks the first official step in this long process which will, without doubt, give the response to this question."

After Father Cavanagh's remarks, Father Mark O'Connell, the archdiocese's judicial vicar and vice-chancellor, read the decree written by Cardinal O'Malley announcing the opening session of the inquiry and naming the officials who will conduct it.

The documents relating to the cause's opening were signed and notarized.

The meeting concluded with a singing of "Salve Regina."

Several local members of Opus Dei who were in attendance had known Father Muzquiz, and reacted positively to the opening of his cause.

"He was a very cheerful person, an extraordinarily dedicated person who clearly grasped God was calling him to do something. That was the focal point of his life," said John Coverdale, a member of Opus Dei for over 50 years and author of "Putting Down Roots: Father Joseph Muzquiz and the Growth of Opus Dei," a 2009 biography.

Coverdale added that Father Muzquiz was "intelligent and hard working."

Alan MacKay had been to confession with Father Muzquiz, and the two men were acquaintances.

"Everybody who knew him well thought he was a saint," MacKay said. "I'm very happy the Church is taking cognizance of his sanctity."