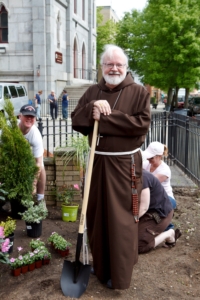 'The Pastoral Center staff has taken on different service projects throughout the diocese ... So on Wednesday I stopped by to greet them and to thank them.' Pilot photo/CardinalSeansBlog.org

Each year we have a celebration to mark the silver and golden jubilees of our priests, so on Thursday (5/19) evening I presided at the 50th Anniversary Mass for our golden jubilarians. The Mass was at Regina Cleri. Several of the men are residents of Regina Cleri and we also prayed for the deceased members of that class. It was the first time that I was there since the renovations; they did a beautiful job. The director, Stephen Gust, is to be commended for the wonderful refurbishing of the facility.

As he has been in the past, Msgr. Frank Strahan is very generous in providing the music for the festivities. Several of our auxiliary bishops and other guests were also part of the celebration. It's important for us to mark these important anniversaries in priests' lives and to express our gratitude for the priesthood and for their particular ministry. There are 700 years of priestly ministry represented in those 14 men and thousands of Masses, baptisms, confessions, weddings, funerals, and hours of service to God's people. So, on behalf of all the people whose lives were enriched by their ministry, we express our thanks and evoke God's blessings upon them and their ministry going forward.

It's a parish that has always welcomed immigrants and now serves many people from Spanish speaking countries who are an important part of that parish. I concelebrated Mass with a number of the Jesuit fathers who help out there ordinarily in that ministry.

On Tuesday (5/24), I went to the Catholic Schools Foundation Scholars Award Mass. This was the inaugural class of CSF Scholars. Nearly 100 incoming high school freshmen attended the Mass at the cathedral. The class includes 172 students and is receiving over $400,000 in scholarship aid. The scholars were selected by their high schools as students who were determined in their educational endeavors and showed leadership in their communities. After the Mass we had a reception and each of the scholars was given a pin to mark the occasion.

The Pastoral Center staff has taken on different service projects throughout the diocese and one of them was to do some landscaping work this last week at St. Katherine Drexel, to clean and beautify the parish. So on Wednesday I stopped by to greet them and to thank them. While I was there I met with the pastor, Father Gerry Osterman, and then spent a little time with the girls from Mother Caroline Academy.