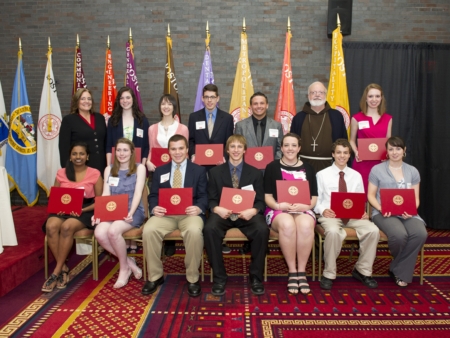 'Monday evening (5/16) I was happy to participate in the ceremony to present the Cardinal Humberto Medeiros Scholarships at Boston University. BU awards full scholarships to 12 graduates of Catholic high schools in the archdiocese.' Photo courtesy/Boston University Photography

...I celebrated the 50th anniversary Mass at St. Athanasius in Reading on Sunday (5/15) morning.

A number of the priests with connections to the parish were able to be present together with the current pastor, Father Darin Colarusso, particularly former pastor Father Bill Kremmell. They had a wonderful music program and an enthusiastic response, and of course there was a birthday cake for the parish in the parish center.

Monday evening (5/16) I was happy to participate in the ceremony to present the Cardinal Humberto Medeiros Scholarships at Boston University.

BU awards full scholarships to 12 graduates of Catholic high schools in the archdiocese. Since the scholarships were instituted by the then-president of BU, Dr. John Silber, in 1986 over 300 hundred students have been given these scholarships which are worth to date $35 million dollars. Dr. Silber knew of then-Bishop Medeiros' work with immigrants as bishop of Brownsville, Texas, and then came to know him well when he became the Archbishop of Boston. Dr. Robert Brown, the current BU president, was unable to be there, but he was represented by Vice President for Enrollment and Student Affairs, Dr. Laurie Pohl.

...It's a wonderful opportunity for graduates of our Catholic high schools. Another nice feature about attending college at BU is that we have a very robust campus ministry program there, with a large participation from the students. The university has always been very supportive of the archdiocese and our ministry there.

Wednesday (5/18) I celebrated Mass for the consecrated virgins in the archdiocese. Once a year we meet with them so we can hear an update on their activities. The charism of the consecrated virgins was very prominent in the first centuries of Christianity and now has been newly restored in the Church after the Second Vatican Council. We are very blessed to have a number of women who have answered this vocation in our archdiocese.

Each year Catholic Charities has a gala dinner that I am happy to be able to attend. With the new demands on the services of Catholic Charities due to the economic crisis and the cutbacks in government funding, these sorts of fundraising efforts are more important than ever. I am pleased to say that they announced that the dinner raised $1.6 million to support Catholic Charities' critical work.

One of the people who addressed the banquet was Leosandra Santiago, a young woman from Santo Domingo who had been living in a shelter. Through the help of Catholic Charities she learned English and now is employed and is able to provide for her children. It's just a beautiful story of how Catholic Charities is able to change people's lives.

This year the alumni of Notre Dame University were an important part of the fundraising as we honored past president Father Theodore Hesburgh. Father Hesburgh will be 93 next week and he is known and beloved by many generations of Notre Dame alumni, many of which were present at the dinner that was co-chaired by John Mahoney and Brian Moynihan. Father Hesburgh was unable to be present, because he recently underwent surgery, so the award was accepted on his behalf by Notre Dame's current president Father John Jenkins.

Debbie Rambo, who became the president this year after many years of service at Catholic Charities, is doing an outstanding job. This past year, Catholic Charities served over 200,000 people at thirty different sites.