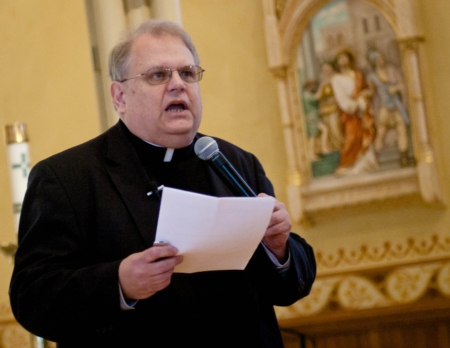 Msgr. James Moroney, a faculty member at St. John's Seminary and priest of the Diocese of Worcester, delivers the keynote address at this year's Co-Workers in the Vineyard Conference Apr. 8 at Our Lady Help of Christians Church in Newton. Msgr. Moroney addressed the conference's theme, "The Parish of the Future." Pilot photo/Jim Lockwood

NEWTON -- Hundreds of area lay pastoral workers and clergy recently devoted a day to learning about ways to make their parishes even more vibrant.

On April 8, the Masters of Arts in Ministry (MAM) program at St. John's Seminary's Theological Institute for the New Evangelization (TINE) hosted the fourth annual Co-Workers in the Vineyard Conference at Our Lady Help of Christians Church in Newton. The theme of this year's conference was "The Parish of the Future." The meeting drew nearly 300 lay parish staff and clergy.

TINE vice-president and MAM director Aldona Lingertat said the annual conference is held to raise awareness of the United States Conference of Catholic Bishops' document entitled "Co-Workers in the Vineyard of the Lord," which discusses collaboration of the clergy and laity in parish life.

"We've tried to pick a topic that would be important to our lay leadership, clergy, deacons and religious and bring them together as co-workers to learn and to dialogue," Lingertat said.

Cardinal Seán P. O'Malley opened the 2011 meeting with a prayer and remarks.

In his address, the cardinal called on pastoral staff to discover new ways to share the Good News with the modern world. He said today's parish leaders need to instill in those they serve an understanding of vocation as a call from God to serve.

"We must help our parishioners move from being consumers to active disciples who share in the mission, and missionaries of Jesus," he said.

Cardinal O'Malley was followed by a keynote address from Msgr. James Moroney, a faculty member at St. John's Seminary and rector of St. Paul's Cathedral in Worcester.

Msgr. Moroney is also a Vatican consultant for worship and executive secretary of the Vox Clara Committee, which has assisted with the recent translations of Latin liturgical texts to English.

He said that successful parishes have four key features -- they regard the Eucharist as the "source and summit of the entire Christian life," achieve unity, they are modeled on love and they hope in Christ.

"Any parish worthy of the name 'Catholic' ought to be filled with the hope of the children of God, resolute that Christ will not abandon us and fulfill every one of our promises," Msgr. Moroney said.

Msgr. Moroney's remarks elicited positive reaction from attendees who spoke with The Pilot following the talk.

"I think the keynote speaker was wonderful because there are no answers other than to go back to the Eucharist and back to our mission to evangelize," said Pete Braudis, a catechist at Our Lady of Grace Parish in Pepperell and a MAM student.

Also during the day's session, Msgr. William Fay, chairman of the archdiocese's recently-formed Pastoral Planning Committee, presented attendees with an update of his committee's work.

Msgr. Fay addressed the importance of pastoral planning for the future, given that weekly Mass attendance is down to 16 percent of registered Catholics and that in 10 years, the Archdiocese of Boston will likely be served by about one-third to one-half of the 360 priests available for active ministry today.

He said that by 2023, there will likely be fewer than the 291 parishes the archdiocese currently has.

"We are in this for all of us because it's all of us together in Christ, of the archdiocese and its great future," Msgr. Fay said.

Following lunch, participants could attend one of three breakout sessions on specific aspects of parish life.

Benestad discussed the need to evangelize, and that evangelization practices should be rooted in the Eucharist. It also discussed what Benestad called "best practices" in that area.

A session was also led by Paulist Father Bob Rivers, author of the book "From Maintenance to Mission: Evangelization and the Revitalization of Parishes." The book discusses the importance of evangelization in building vibrant parishes.

Father Rivers said his session discussed that book, and the importance of having a parish mission and evangelization plan in place.

Father Paul O'Brien, pastor of St. Patrick Parish in Lawrence, led a third presentation on diversity in parishes. He was joined by Diane Jarvis, who is the religious education coordinator there, and Guadalupe Ospina, co-director of the parish's Hispanic apostolate.

Father O'Brien said parishes should be the "faith home" for every Catholic in its geographic area and serve the needs of everyone in its territory.

"A parish becomes more diverse insofar as it successfully pursues these missions," he said.

The parish should understand the makeup of the community based on factors such as socioeconomic or ethnic groups in their area, Father O'Brien said.

"The ministry that we are supposed to be offering is the Church that is One, Holy, Catholic and Apostolic," Father O'Brien added.

Father O'Brien's remarks resonated with Robert Sommer, a MAM student and parishioner at St. Mary of the Hills in Milton.

"It rang true in the sense of a Church that does not serve, serves no one," Sommer said.

"The change in attitude from being focused on self, the core group, to focus on others liberates and frees people up to be creative and energetic," he added.