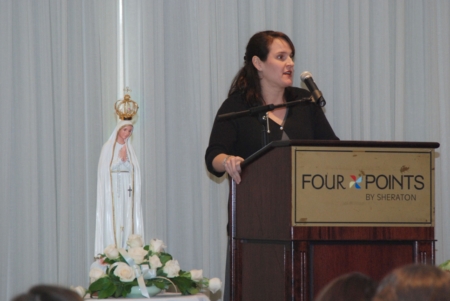 NORWOOD -- There are many people in today's society who believe that the Catholic Church is, at its core, a sexist institution and that its very teachings reveal its "eternal sexism," said Erika Bachiochi at the Women Affirming Life breakfast on March 5.

These people often believe that "no self-respecting woman can follow Church teaching." In order to reach them with the pro-life message and other beliefs propagated by the Church, Catholics need to articulate a rational argument that is backed by experience and study, she said.

"Before we can know the Church is for us, we need to know it's not against us," she added.

Bachiochi -- an author, lawyer, theologian, wife and mother -- said that the information needs to be packaged in such a way that truth-seekers of every stripe will have access to it.

She has attempted to do so in two recent publications -- a book entitled "Women, Sex, and the Church: A Case for Catholic Teaching" and an article that will appear in the spring edition of the Harvard Journal of Law and Public Policy entitled "Embodied Equality: Debunking Equal Protection Arguments for Abortion Rights."

At the Women Affirming Life breakfast, she spoke to a nearly all-female audience of almost 300. By a show of hands, about one-third acknowledged that they had never attended one of the previous breakfasts, which have been organized annually since 1992.

Describing herself as a "one-time secular feminist," Bachiochi said she traveled a long road to come to the understanding that Catholic teaching is the "embodiment of an authentic feminism."

She added that, while in college, she found in secular feminism "a complex and compelling narrative that even offered reasons for my inner turmoil." That narrative explained her discomfort in her own body and distrust of men and gave her a cause to fight for: social justice for the poor and equality for women.

"As a feminist, I had assumed, along with many of my cohorts, that changing external political arrangements would somehow grant me the internal peace for which I longed," she said.

But this breed of feminism "adopts a curious logic." It purports that in order for a woman to be the best she can be, she must be as little like a woman as possible, she said.

Bachiochi added that her support of abortion depended on the belief that it was necessary for women in order for them to take their place as equals in the public sphere.

"The thought that we as a nation would attempt to solve the problems of the poor by helping them rid themselves of their own children haunted me. It especially offended me that the poor were not among the membership of the elitist women's groups who supposedly spoke for them," she said.

Society needs to recognize the distinct dignity of women and do the much more difficult task of creating environments at schools and in the workplace that welcome women who have children, who are, incidentally, the great majority of women, she said.

Marianne Luthin, director of the Archdiocese of Boston's Pro-Life Office of which Women Affirming Life has been a part since 2002, said the breakfast is meant to bring pro-life women together.

"So many of them feel alone," she said.

Luthin added that there were more young women at the breakfast than she had ever seen in the past.

Christine Kania, a senior studying elementary education at Boston University who is on the board of the school's Right to Life group, said that the current culture promotes the idea that greater access to contraception will decrease the abortion rate.

"In today's world that idea is so widely held that no one stops to consider what effect it has had on the structure of society," she said.

In a recent session of one of her education classes, she learned about a group that seeks to promote in schools the acceptability of stepfamilies. Kania said she recognizes that many children are from blended families and wants to affirm the dignity of every human person, but she also believes that it should be acknowledged that broken homes are not the ideal.

"It is in the stability of marriage that humans find fulfillment," she said.

Peggy Whitbread, parishioner at St. Mary's Parish in Foxborough, said that as a grandmother, she is encouraged by the young women who lay claim to the life issues and are able to defend and articulate them.

"It gives me great hope for the future," she said.

She added that when men are exposed to authentic women, those women touch their hearts.

Father Edward Riley, director of the Office of Pastoral Formation at St. John's Seminary in Brighton, testified to that fact. During his homily at the Mass he celebrated prior to the breakfast, he spoke about the positive influence his sisters have had on him throughout his life. Three were in attendance and the fourth was unable to come because she was in the hospital. That week she had given birth to her 11th child who was baptized and died shortly after.

Father Riley said he understood the sacrifice women make to bear life when he watched his sister, recovering from a cesarean delivery, lovingly reassure her eldest children while they grieved the loss of their sibling.

He said to the women, "You are the guardians of life here on earth and life eternal."