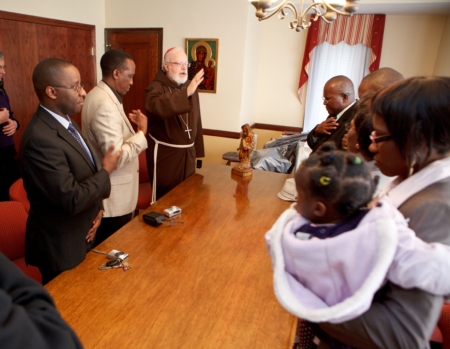 '... I met with the newly elected leadership of the Uganda Catholic community. Boston is home to the largest Ugandan community outside of Uganda.' Pilot photo/CardinalSeansBlog.org

I want to begin this week noting that our prayers right now are certainly with the people of Japan as the country begins to recover from last week's (3/11) devastating earthquake and tsunami. All of us are very alarmed to see that even a country such as Japan, which has done so much to protect its citizens from the devastation of earthquakes and tsunamis by very careful building codes, early warning systems, civil defense drills, etc., has endured such devastation. On top of that, the destruction visited upon the nuclear reactors have now caused dangerous radiation to be released into the atmosphere. From all reports, the Japanese sense of discipline, community and civic-mindedness have been very helpful in helping them endure this crisis.

We have authorized a second collection in our parishes which we will send through Catholic Relief Services. We are asking pastors to take the collection either this weekend or next. It certainly is an alarming situation and we pledge our continued prayers and support to the people in Japan in this terrible time of need.

In between the two Rite of Election ceremonies (3/13) I met with the newly elected leadership of the Uganda Catholic community. Boston is home to the largest Ugandan community outside of Uganda. Mass is celebrated in Luganda, one of the native languages of the country, on Friday evenings and on the last Sunday of each month at St. Mary Parish in Waltham.

The new leaders, accompanied by their chairman, Henry Ndawula, and Father Michael Nolan, met me to share news of how God is blessing their community here in Boston. I gave them my blessing and I extended it to their families and all the Ugandans in Boston.

Meeting with Superiors of Women Religious

Also that day (3/16), we had our gathering of the superiors from different communities of women religious. The meeting gave us an opportunity to talk about pastoral planning, Catholic education and some of the initiatives going on in the diocese right now. Sister Marian Batho, our delegate for religious, did a very good job organizing the group. We are very grateful for the presence of all the religious women in the archdiocese, who, over the last two centuries, have made incredible contributions to the life of the Church and whose witness, ministries and prayer are a great source of blessings and consolation for all of us.

Thursday (3/17) was the Feast of St. Patrick and we began the day by hosting a press conference to announce the opening of the new Theological Institute for the New Evangelization, TINE, at St. John's Seminary.

This new institute consolidates and expands the seminary's formation offerings for laypersons, deacons, and religious. TINE includes the well-established Master of Arts in Ministry (MAM) degree, as well as the certificate programs in catechesis and apologetics the seminary has made available in the last two years. ...I was happy to be joined at the press conference, which we held on the lower floor of the cathedral, by St. John's rector Bishop Arthur Kennedy, vice-rector Father Christopher O'Connor, Aldona Lingertat of our MAM program, and David and Angela Franks, who are faculty members of the seminary and the MAM program.