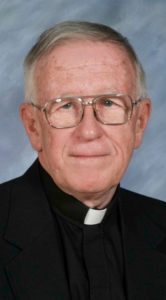 Father Edward Sherry, for the past four years the pastor of Holy Redeemer parish in Merrimac, died after a brief illness on March 8 in Newburyport. He was 68.

He was born in Medford on July 21, 1942 the elder of the two sons of the late John and Florence (Finnegan) Sherry. His younger brother, Thomas, predeceased him.

He was raised in Chelsea and was a proud son of Our Lady of Grace parish there. He attended the parish grammar school, from there he went on to Christopher Columbus High School in Boston's North End where he completed his high school studies under the direction of the Franciscan Friars. An upperclassman at the time was John Dooher, now one of Boston's auxiliary bishops.

Inspired by the priests of his home parish -- in fact, throughout the remainder of his life he boasted of the great priests he knew and admired there -- he enrolled at the archdiocesan minor seminary, Cardinal O'Connell, Jamaica Plain and went on to complete his seminary studies at St. John's Seminary in Brighton.

Richard Cardinal Cushing ordained him to the priesthood at Holy Cross Cathedral on May 29, 1968. His first assignment following ordination was as an assistant at St. Joseph, Malden. Over the next several years up until 1985 he would be an assistant or an associate at several other parishes -- none of them more than 10 miles from Chelsea -- from 1972 to 1973, Incarnation of Our Lord and Savior Jesus Christ, Melrose; from 1973 to 1982, Immaculate Conception, Malden; 1982-1983, St. Raphael, Medford and 1983-1985 St, Mary, Winchester.

Cardinal Bernard Law named him pastor of Nativity Parish in Merrimac, probably as far north from his beloved home parish as he could be and still remain within the archdiocese. He helped oversee the consolidation of two parishes: Nativity, Merrimac and St. Ann, West Newbury into a single parish serving both towns and named Holy Redeemer.

Father Arthur Coyle, Regional Vicar of the Merrimack Region, was the principal celebrant of Father Sherry's funeral Mass at our Lady of Grace Church on March 14. Father John Leonard was the homilist and among the priests concelebrating were classmates: Fathers James O'Leary, St. Camillus, Arlington; Joseph Robinson, St. Margaret, Burlington and Thomas Gillespie, St. Theresa of Lisieux, North Reading; among the other concelebrants were Msgr. William Glynn, senior priest, Duxbury; Father Thomas Foley, archdiocesan vicar for parish life and leadership; the pastor of Our Lady of Grace and of St. Mary of the Assumption, Revere, as well as area vicar, Father James Barry; and Father John Schatzel, senior priest, Marshfield. Central Regional Bishop Robert Hennessey presided at the funeral, delivered the final commendation and representing Cardinal O'Malley expressed the thanks and sympathy of the archdiocese to Father Sherry's family